It was June 12, 1959 – 55 years ago today – when good ol' Captain Penny made a personal appearance at Shoreway Shopping Center in my current town of Sheffield Lake. 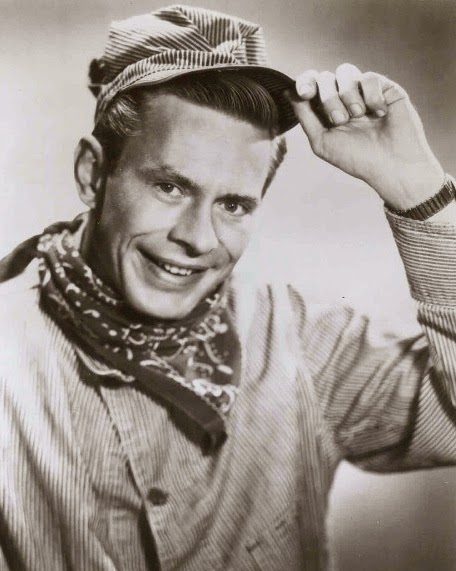 Thousands of local Baby Boomers (including my siblings and me) looked forward to watching Captain Penny – Ron Penfound in real life – daily on WEWS Channel 5 in Cleveland. According to this entry on the online Encyclopedia of Cleveland History, he hosted his daily show from 1955 until 1971. The various segments of his show, such as Pooch Parade (which featured animals that could be adopted) and visits from Jungle Larry still live on in our collective memories.

Then there was the Captain's great mixture of TV cartoons (such as Roger Ramjet) and old movie shorts (such as the Little Rascals, and the Three Stooges – Larry, Curly and Moe, as the Captain uniquely listed them).

Ron Penfound also did some announcing for the Cleveland Indians in the late 60s and early 70s. Once, we saw him at the Stadium before a game (we were there using our free tickets from the Cleveland Press for getting all A's). Even though he was wearing a sport coat and tie, we recognized him immediately, and were just as thrilled as if we had seen Hawk Harrelson.

It's funny thinking back how these hosts of local children's shows such as Captain Penny, Barnaby, Woodrow the Woodsman, etc. shaped a kid's view of grownups. They were, in effect, babysitters – people that were part of our lives almost daily that addressed us directly from their TV perch.

Captain Penny was probably the most normal. He was kind and gentle, never goofy, and careful to remind us not to imitate the Three Stooges. Memorably, he always signed off with his great closing line: "You can fool some of the people all of the time, and all of the people some of the time, but you can't... fool... Mom!" It's probably why Mom didn't mind us watching him all the time.


Kids sure don't have any equivalent influences on TV today, that's for sure.

We always watched Captain Penny at our house!I liked it when he had Jungle Larry on as a guest!

Hi Dorene! You're right, it was one of the best segments on the show---and consequently made it exciting to see JL at Cedar Point each summer!

He would show pictures that kids had colored and their mothers had sent in. I did a Christmas picture with my name in big letters at the top, probably about 1963, and he held it up. I missed seeing it though, but a brother did.

My brothers and I got to meet him at the Grand Opening of Giant Tiger in Lorain, back in '68.

Captain Penny, as Ron Penfound also did the commentary at Lorain County Speedway for several years - except when he would enter the demolition derby as a driver.

Ron Penfound acted in one of The Rifleman episodes. I was watching a rerun of the show a couple months ago and said to myself, "Hey! Isn't that Captain Penny?" I did a bit of searching on the web and found this:

He was right - you can't fool Mom!