It's time to "fall back" again.

In the old days, that meant that the Journal would run a special reminder on the front page, usually consisting of a photo and accompanying article, or maybe a special cartoon.

Strangely, Daylight Savings Time ended in Lorain County on the last Sunday in September that year. An accompanying article noted that, "However, many areas, generally in the northern and eastern sections of the country, will not return to standard time until Oct. 27."

It sounds like it was a real mess back then when it came to coordinating the time change, with states deciding for themselves when to do it.

Here's another one of the Journal's time change reminders (below), this one from 1968. It ran on Saturday, October 26 and includes an amusing cartoon from the late great Gene Patrick. 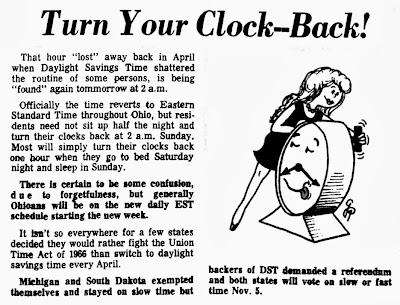 Note that it makes reference to the Union Time Act of 1966, the federal law that hoped to "promote the adoption and observance of uniform time within the standard time zones."

Click here for a history of Daylight Savings Time in the United States.


****
By the way, the pretty receptionist in the Journal photo – the former Mary Jane Pozega – and her late husband Jack Snodgrass celebrated her 50th wedding anniversary back in 2010. Click here to see the online Morning Journal announcement.
Posted by Dan Brady at 6:44 AM