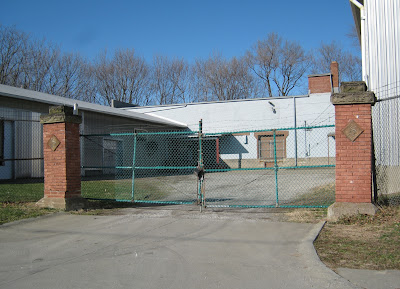 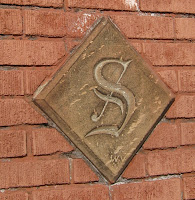 After photographing the building at 12th Street and Reid (that I blogged about yesterday), I turned around in this driveway. I couldn't help but think that the 'S' on the pillars looked vaguely familiar. That's when I realized I was looking at part of Lorain's bottling history.

The 'S' stands for Seher, and the gates apparently used to lead to the William Seher Company bottling and distribution facility.

William Seher had been the manager of the Lorain Brewing Company (which was a branch of the Cleveland & Sandusky Brewing Company). From 1924 on, it appears that Seher went into the bottling business for himself with his self-named company.

A quick look through the city directories showed that Seher's company was originally at 330 W. 12th. By 1926, it was using the 304 12th Street address, which is the location for the two pillars and gate in my photograph.

Seher passed away some time between 1933 and 1937. But his company continued at the 304 12th Street address until around 1957, with his son and widow at the helm. A phone book ad reals that both beers (Genesee, Fort Pitt and Hudepohl) and soft drinks (Vernors, Hires Root Beer and Cotton Club) were distributed by the company.

Beginning in the 1959 book, the bottling facility had new owners and a new name: The T. J. Bottling Company. T. J. apparently stands for the first names of the company's principals: Jason J. Kallis (president) and Tony Palumbo (vice president).

The T. J. Bottling Company continued to bottle and distribute the signature product, Seher's Old English Ginger Beer as well as a variety of other soft drinks and distilled water products.

Today, the gate with the distinctive pillars is the entrance to Geometric Forms .


It's interesting that the William Seher Company distributed both Vernors and his own ginger beer product. I wonder which one was the bigger seller? Some Lorain friends of mine mentioned the Seher Old English Ginger Beer to me a few years ago, and I had never heard of it before. (I grew up on Vernors, which was one of the things my siblings and I were given to drink when we were sick along with 7Up. I can still remember the occasional coughing or sneezing jag that resulted if we drank it too soon after it was poured.)

Hi Dan English Ginger Beer is a totally different animal than Ginger Ale... so I can see why both........ you can get Ginger Beer at World Market in Avon see what you think :)

Thanks, Loraine! I thought it was beer in the same sense as 'root beer'. I'll check it out! I'll bet they go well with Ginger Snaps!

I used to live just west of there, on 12th Street, right next door.

We often got Vernor's, ginger ale, or 7-Up if we were carsick.

You can’t find good tasting ginger beer like that.