Own one of the houses on the vintage postcard!

Although you can't see it very well on this vintage postcard, the house at the far right – at 739 W. Ninth – is currently for sale.

I did a little online research to try and find out how old it was. The Lorain County Auditor website has the year it was built listed as 1900, which usually means it was built before 1900.

At the library, I dug around in the available city directories. The oldest book that has listings by street is the 1912 edition. William H. Heyer, a foreman, was listed as the owner of 739 W. Ninth Street.

The pre-1912 books have different names for many, if not most, Lorain streets. W. Ninth Street used to be called Second Avenue. After cross-referencing some residents to make sure, I found William H. Heyer in the 1905 and 1903 books at 315 Second Avenue.

Going back even further to the 1891 book (the oldest at the library), I discovered that Lorain had a different house numbering system back then. It appears that someone just counted the houses (or lots) on the street and numbered them numerically from Broadway. 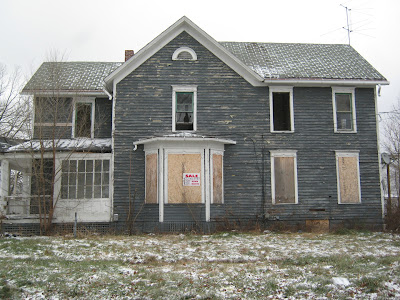 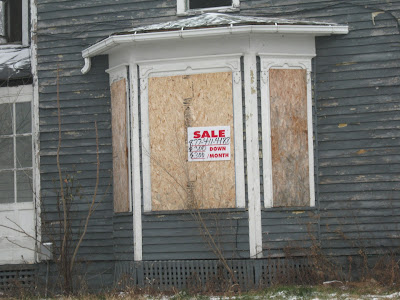 Sure would be nice if the right handy person bought it and gave it some TLC! 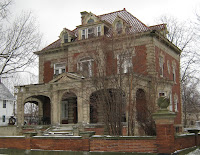 Incidentally, while researching the above house in the city directories, I couldn't help but look up the William Seher (or the Slattery Motion Pictures) house at 329 Ninth Street to see how old it was. My research wasn't conclusive, but the earliest listing that I could find showing Seher living there was in the 1905 book – when the address was 223 Second Avenue.

Since there were no listings of addresses and residents by street, it would be a real scavenger hunt to see if the house was in the book before Seher lived there. However, according to the Black River Historical Society's Images of America Lorain book, it appears that Seher did build the house –  for the then-unheard of sum of $15,000.

Click here to read Alan Hopewell's reminisces about the Seher mansion over at his Pointing the Cannon blog.
Posted by Dan Brady at 5:30 AM

Trace was saying that, were we in Lorain, she could swing $300 a month; $46 dollars less a month than we pay for a 1-bedroom apartment in Whitney.

Plus the house is naturally air-conditioned (check out the upstairs windows) and apparently has DirecTV as well!

Thanks, Lisa! I saw it last week on the way home from picking up my Selenti's Pizza--but I didn't have my camera with me!