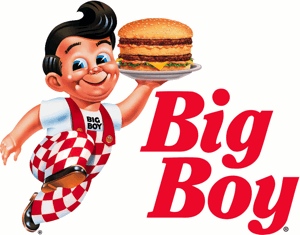 Before I close out my series on Manners Big Boy, I thought I would point out something that has confused me for some time: there are two different Big Boy mascots.

The one you see the most often is the one with checkered overalls above, hoisting his namesake sandwich. He's kinda chubby and has that distinctive upswept hairdo. He appeared in all those comic books that were given away at Big Boy restaurants. (Click here to read the very first issue at www.animationarchive.org.)


He was featured prominently in the movie Austin Powers: International Man of Mystery (1997) when Dr. Evil escaped at the beginning of the movie, by launching himself into space inside a rocket shaped like a Bob's Big Boy statue.


The other Big Boy is the one that we grew up with in Northeast Ohio, featured in the Manners ads. This lad isn't as chubby, and has a slingshot sticking out of his back pocket. He also wears a paper hat with the Manners name on it. (Sometimes it just says "Big Boy".) 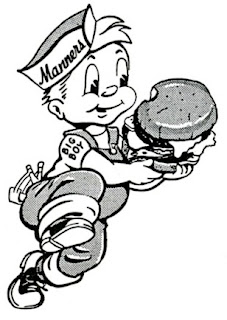 In his early appearances, his overalls are plain. Later on, they have stripes.

He was featured in his own comic books too.

So why are there two different Big Boys?

The chubby one in the checkered pants is more or less the 'official' one, meaning that he evolved as the mascot for Bob's Big Boy in California, where it all began in 1936. You can visit the Bob's Big Boy website here. 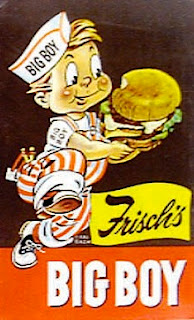 When Bob's Big Boy decided to franchise their sandwich, Frisch's in Cincinnati (owned by Dave Frisch) was the very first licensee. They had the rights to Big Boy in Ohio, Kentucky and a few other states.

You can visit the Frisch's Big Boy website here.

The Frisch's mascot ended up looking a little different from the Bob's Big Boy version. And he still does to this day.

According to the Tom Feran article, Bob Manners bought the rights to the Big Boy from Dave Frisch and thus ended up with the Frisch version of the mascot.

I actually like him better than the Bob's version.

To me, he's got a lot more personality. He looks like a fun-loving kid with his slingshot. He's actually taken a bite out of the double decker, rather than delivering it to a customer. He's running away with it!

Here's how he looks now (below).

Compare it with his chubby counterpart at the top of this post. It looks like the now hatless, hapless mascot is slowly being forced to conform to his double-chinned double! Note the wavy hair and checkered overalls. Plus, it looks like he has been forbidden to sample the burger. "Don't eat it, just deliver it as per our instructions," he's been told by the corporate suits.
Nevertheless, the two different Big Boys coexist peacefully. And I still like the Frisch's one better.
****
Back in the fall of 1999, I took a road trip to Columbus to shoot along U.S. Route 40, the National Road. I snapped my way (no digital camera then) from one side of the town to the other, shooting a variety of things.
One of the subjects was this Frisch's Big Boy which was right on U.S. 40 on West Broad Street. 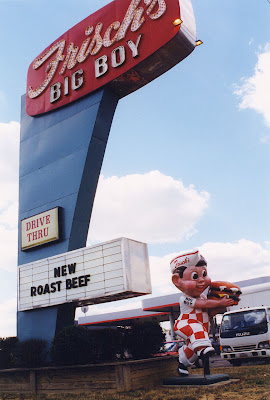 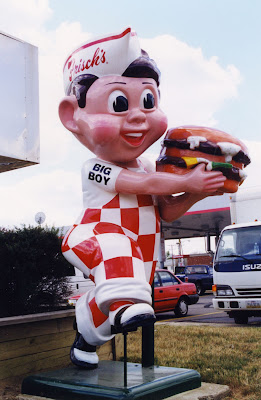 I read online that it's gone now, replaced (just like the Kahiki, Columbus' famous Polynesian supper club) by a Walgreens. Ugh.
****
And as a final note, after writing about Big Boys for several days now, I just had to have one! (It's been about 12 years since my last one!) So after a haircut and some business out in North Olmsted last week, on a night that the spouse duped me for dinner, I headed out to the Big Boy at 12920 Brookpark Road in Cleveland. 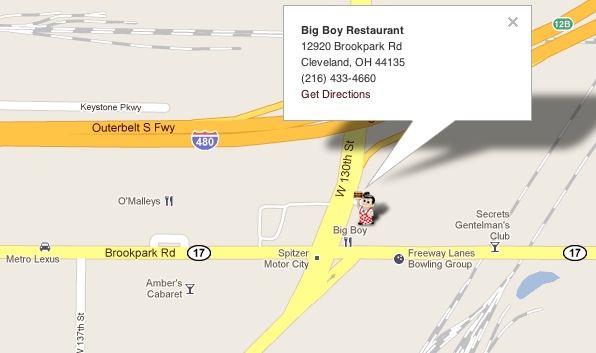 I walked in, ordered a Big Boy for take-out, and sat down. They had a nice display of Big Boy items for purchase in the lobby, including a nodder, a bank and a travel mug. No comic books, though.
Back in the car, I excitedly unwrapped my Big Boy. It looked great – huge – and tasted fantastic. As I told my co-worker the next day: "It was the best thing I ate all year."
Until Thanksgiving dinner, of course.
Posted by Dan Brady at 6:06 AM