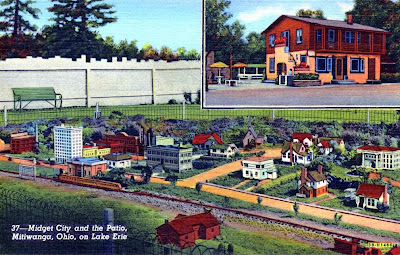 I saw this postcard for Midget City and almost didn't recognize the building, even though I pass it regularly on our Sunday drives out to Tofts in Sandusky.

The back of the undated postcard reads:

MIDGET CITY. The largest little city in the world. Located on Lake Road in Mitiwanga, Ohio on Lake Erie. A complete city in an outdoor setting, constructed entirely by one man. Visited annually by thousands of people. The PATIO at the west end of entrance is an ideal spot for good food and refreshments.

Several online copies of this postcard on Ebay are postmarked from as early as 1945 to as late as 1951.

Of course, I brought my camera on Sunday and made sure I got the 'now' shot of the same view of the Patio. Although Midget City is long gone, the Patio Tavern is still around. 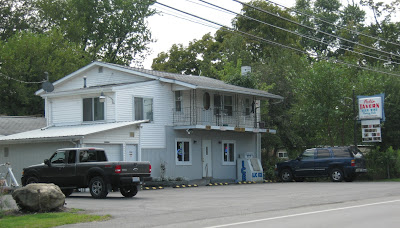 Here's another postcard (below) featuring Midget City. (Both postcards are courtesy of the New Tribes Mission website.) Although it is a slightly different setup, you can recognize enough of the buildings to know it's the same attraction. Plus the fence around it looks similar in both photos. 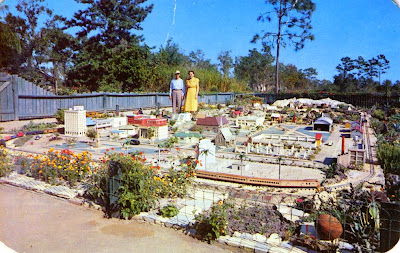 Midget City apparently was moved around a bit. It was also in Milan, Ohio for a time before Mitiwanga. Postcards of the attraction when it was in Milan are 'real photo' postcards, and show a different setup with a very low picket fence around the whole thing.

The facsimile edition of Lake Erie Vacationland in Ohio, a 1941 travel guide compiled by the Ohio Writers' Program of the Works Projects Administration, has Midget City located on State Route 113. It describes it as "an interesting re-creation of an entire community – streets, bridges, railroads, houses, commercial and industrial buildings, with interior lighting and a moving train. The tiny structures, all in true scale, were built by L. T. Cronk as a depression hobby."

So it looks like it was in Milan until at least the early 1940's before being moved to Mitiwanga by the mid-1940's.

There is also a little bit of information about the attraction's move to Florida over at the hilarious Roadside America website.


Next: More on Mitiwanga
Posted by Dan Brady at 5:51 AM

Wow....I've never heard of this place!