The Mystery of the Big V

One of my favorite movies is It's a Mad, Mad, Mad, Mad World, and in it a group of treasure hunters are competing against each other on a quest to find a stash of loot that is buried under a "Big W."

Well, I've been on a quest for a few years now too, but instead of a "Big W", mine involves a "Big V." You know which one I'm talking about – it's down at Victory Park, at the intersection of West Erie (Route 6) and Fifth Street. 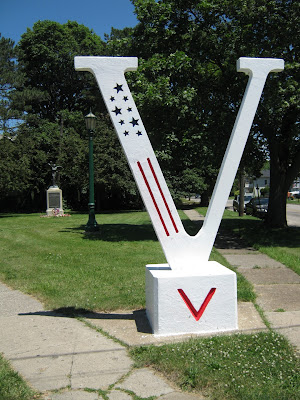 I've checked newspaper microfilm for many holidays since from the mid-1940's until the mid-1960's (Memorial Day, Veterans Day, etc.) and there is never any mention of the Big V being installed, dedicated or refurbished. I've bugged the fine people at the Black River Historical Society, the Lorain Public Library and several of the area's most knowledgeable historians – and nobody knows!

What we do know is that the V presently at the park is not the original. As fellow blogger Alan Hopewell pointed out in a blog comment (which the Black River Historical Society confirmed), the original V was damaged in a car accident – but we don't have a date for that either! Alan thinks it was the mid-1960's.

We do know – thanks to Frank Sipkovsky of the BRHS – that Baldo Campana is the person who generously constructed the present Big V. But who made the first one?

Why do I want to know? Well, because the structure is kind of like the Lakeview Park Easter Basket, the Lorain Lighthouse, or the Bascule Bridge. It's a symbol of Lorain that thousands of people recognize and remember. And I think it's important to get the story behind it on record while people who might know are still alive.

So if anyone has any sort of lead as to when the first Big V was first constructed and by whom, I'd be eternally grateful if you posted a comment!
Posted by Dan Brady at 6:48 AM