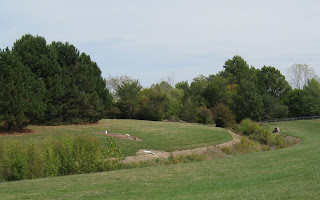 Back here during my series about growing up on Lorain's west side, I mentioned that all the kids referred to the small stream that ran through Willow Park as Willow Creek. Further west, where it ran under Leavitt Road, we just called it 'the creek'.

That's it at left, after its natural state was replaced by concrete. (It was never any fun to poke around in it after that.)

A few years later, I saw a map (in the phone book, I think) where it was revealed that this same creek was actually named Martin Run. I assumed (erroneously, as we will see) that Martin must have been the name of the guy who developed the area. 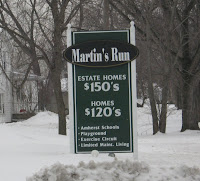 When the far west side of Lorain began to get developed, I was happy to see that the development was going to be named Martin's Run in a nod to local history, but I was curious as to why they made it possessive on some signs and just 'Martins Run' on others – but never just plain 'Martin Run'.

After all, Bull Run of Civil War fame is never referred to as Bull's Run!

Anyway, recently I was looking at an 1874 Atlas of Lorain County at the Lorain Public Library and lo and behold, I noticed on a map of the area that the name 'Martin Run' was a lot older than I realized (below). 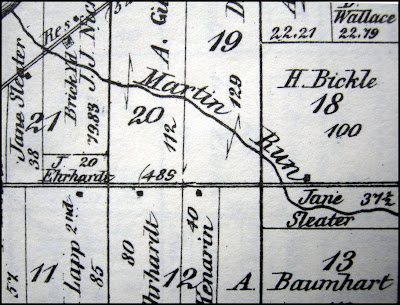 The 'n' in Run on the map rests upon what is now Meister Road.

Then, I was happy to find on the Black River Historical Society website a history of Lorain written by J. B. Nichols in 1924 (which you can access here) that tells how the creek got its name.

As J. B. Nichols relates: "William Martin came with his family in April 1811, from Pennsylvania. He made the trip with an ox team and went on after trading his farm in Pennsylvania, consisting of 300 acres, for nearly 1000 acres in Black River and Amherst. The Martin family settled on lot 21, which adjoins the present country club on the west. It is said that for "some unknown reason" he never got title to any of his western lands except that in lot 21 in Black River Township.


Martin died in Oct. 1830 as a result of an accident. He had been assisting digging a well on a farm on Oberlin Rd. After the day's work was done, Martin, while indulging in a friendly scuffle with some of his companions, fell into the well. After being lifted out of the well he asked to be raised to a sitting posture. With a motion of his hands behind him, he said: "Get thee behind me Satan," and fell backwards, dead. It is said that Jane Martin, his daughter, who afterward became Mrs. Slater, drove the ox team in assembling the logs for the Martin log cabin. This cabin was built on land which has long since been washed away by Lake Erie.


Out of the graves of some of the members of the Martin family grew two large oak trees. These trees are near the present lake bank, just east of the stream known as Martin's Run which runs through the Martin farm."

Well, that's the story. It looks like even as far back as 1924, the creek was being referred to as Martin's Run – so I guess the name of the development is fine as it is!
Posted by Dan Brady at 6:56 AM

I remember myself and a friend getting chased by a couple of construction guys after they seen us walk over the wet concrete! Our foot prints are still there.What fun!

Great article Dan. But I think there's a coverup here. The name was actually Martian's Run. The reasons are of course classified.

Hey, I think you're on to something, Bro. Part of the map that I cropped out is suspiciously labeled "Martin's Farm & Aerodrome".