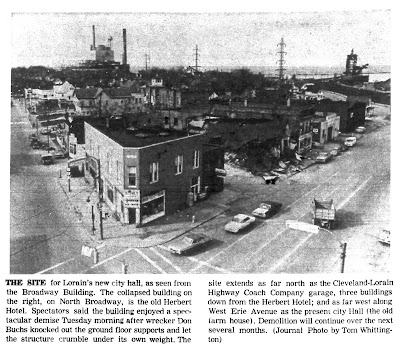 The long-awaited new city hall was going to finally become a reality. As a result, that meant that many of the Downtown area’s oldest buildings would have to go – taking with them the heritage of that area that gave it a unique personality.

The photo above, which appeared in the Journal on January 7, 1971, provides a nice “before” aerial view of the new city hall location. Demolition was just getting underway, with the comfort station coming down a week earlier, and the Herbert Hotel (whose rubble is shown in the photo) at 280 Broadway as the latest target of the excavator.

(Click here to read about some of the restaurants that were in the same building as the Herbert Hotel over the years.)

Here’s a pre-demolition, late 60s street-view photo (courtesy of the Lorain Historical Society) of the area that was being cleared. 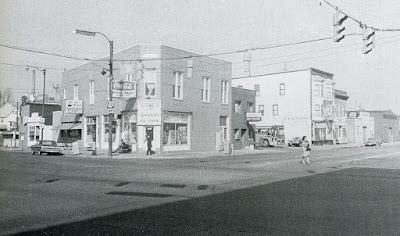 And here’s a “now” view, courtesy of Google Maps. 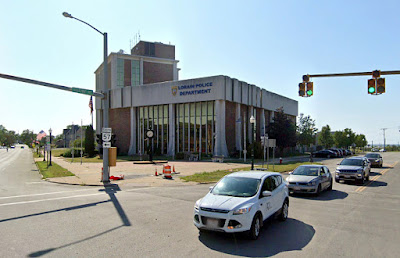 It sure would be nice if the present Lorain City Hall eventually has its own appointment with Mr. Buchs – and that all-important corner becomes the home of tax-paying restaurants, lodging and transportation companies again.
Posted by Dan Brady at 4:24 AM

Wow, thats awesome to see the old coal dumper there in the upper-right hand, Dan.

Sadly, the one in Sandusky is the last operating one on lake Erie.

I also agree it would've been nice to have kept that area like it was.I saw a Greyhound bus stop terminal in the 2nd photo.If I remember correctly there was a gas station across the street from city hall and the Broadway Building on the northeast side of that intersection.Sohio maybe?....And it looks like Mr.Buchs is at it again.The '70s must've been the start of when he really got in cahoots with city hall and them giving him unbid demo jobs.

I believe the gas station you refer to was once Muzik’s. John has a nice photo at his current location

There used to be a gas station as you're going west and come to a stop at the end of the bridge.If you were to look out the right side of your car there was a gas station right where the open field is.It's where the city of Lorain puts out the big inflatable Santa Clause during Xmas.I can only imagine how hard it would be to get in and out of that gas station.But there probably wasn't as much traffic as there is now.Plus people back then were more considerate of others.There would be road rage nowadays.

Here are a few posts showing that service station, from when it was run by Mayor Harry VanWagnen and then later the Muzik Brothers.

If memory serves, the gas station was still there circa 1960, sold Gulf gas and I believe was owned by someone named Beattie(sic). At least it was known to me as Beattie's Gulf station.

Hi Dan - great memories from that shot...I remember catching a Cleveland-Lorain bus with my grade school friend for an Indians game at that garage. I believe it was the summer of '69 or '70. It amazes me today that two 11 year olds could travel from Lorain to downtown Cleveland in relative safety. I still can't believe my Mom let me go! Also, my uncle worked at the "docks" and I can remember him taking me down to the coal dumper on one of his night shifts and letting me sit in the little cab while he dumped the railroad cars loaded with coal into the waiting freighter. Looking back, what a neat experience for a little kid...thanks for posting. Also, do you know if the little Lorain Hobby Shop behind the old City Hall was demolished at this time as well? Keep up the great work...Happy New Year! Todd

I’m guessing that the Lorain Hobby Center at 219 City Hall Place was around for a while longer, as the businesses along there seemed to be untouched by the wrecking ball. I know Genie Sales was there for a long time, at least until the 1990s. I’ll take a look in the directories and see how long the hobby shop was around.

I had a similar experience with a bus to Cleveland although I was in high school. I took a Highway Coach to Cleveland to take a summer art class but didn’t know how to get a bus transfer to the school. So I got off at Public Square and walked all the way to where Cleveland State is only to find out the class was cancelled. I walked around Cleveland all day until it was time to take the bus home. I remember being chased by several panhandlers. Good practice for when I was working in Downtown Cleveland about ten years later!