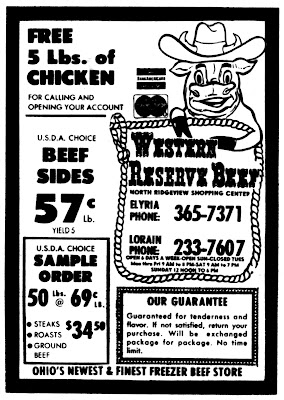 Here’s something that might look familiar to those of you who read the Journal regularly in the early 1970s: an ad for Western Reserve Beef, which was located in the North Ridgeville Shopping Center. The ad ran in the Journal on October 1, 1970.

Whoever designed the ads for this company did a great job. First, the extra-thick border really drew the readers’ eyes to the ad. And second, the ads all featured the great drawing of a cowboy hatted steer, providing continuity (as well as encouraging us to eat his own kind).

There’s not much else to say except that although the company went out of business in the early 80s, it was somewhat ahead of its time. Early during the coronavirus panic this year, there was fear of a beef shortage, and I saw on the news that some people were actually buying a whole steer and having it custom butchered & frozen.

Now that’s someone who really likes their beef.

As for me, as much as I like beef (it’s “What’s for Dinner,” after all) I still prefer to buy it fresh – preferably from Polansky’s.