Here's a pair of Spiegelberg Orchards ads that ran in the Journal back in October 1970 – 50 years ago this month.

This ad from October 9, 1970 touts the selection of apples available – Jonathan, Cortland, Red Delicious and McIntosh – as well as the fresh, home pressed cider. 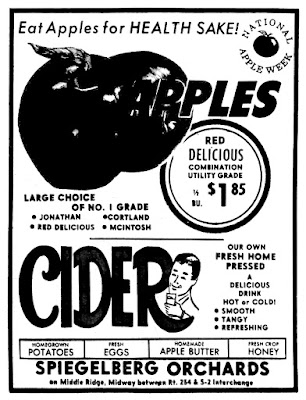 It’s funny how fifty years later, tastes in apples have changed. Longtime favorite Red Delicious was edged out by Gala a few years ago, and newer varieties such as Honeycrisp and Evercrisp are gaining in popularity.

Here’s the current Top Ten List of Most Popular Apples in the World. (Yikes, a Communist apple is number one. Those Rushkies must have tampered with the voting.)

Anyway, on to the next ad. In October 1970, Spiegelberg Orchards was celebrating its 50th anniversary, and that was the theme of this ad from October 16th. 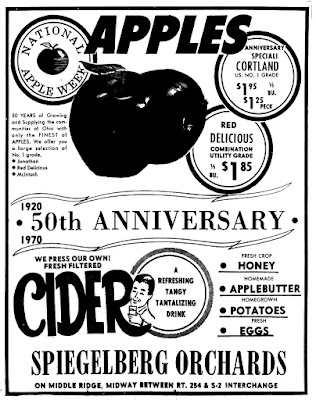 ****
My mother recently surprised me with a story relating to the Spiegelberg farm that I hadn’t heard before.
Back in the 1930s when Mom was growing up, her father knew the Spiegelberg family, and used to buy milk from them at their farm. (Since Mom was a little on the scrawny side, her parents used to make her drink the cream that settled near the top of the bottle back in those days before milk was homogenized.)
Anyway, my grandparents used to visit with the Spiegelbergs for a bit after buying milk, so that left time for Mom and her sister to amuse themselves outside. Mom told me that one time they wandered across the highway to explore an abandoned brick schoolhouse. While investigating it, they found a dusty old 13 star American flag.
(Now that doesn’t mean it was an original. This website points out that 13 star flags were made, and are still being made, for a variety of reasons, including July 4th celebrations.)
Mom and my aunt excitedly brought their prize back to the Spiegelberg farm house. But their joy was short-lived, however, because Grandpa made them put it back where they found it, before the return trip back into Lorain.
Posted by Dan Brady at 4:07 AM

I don't know but I think I would have told Grandpa to blow off and I would've taken that flag.Or I would've told him I took it back to make him feel good and I'd have still brought it home.Just think about it.It probably would've still been in your family as a heirloom right now. A thirteen star flag back then would've probably been an original.If not,it was at least still American made and at least 10 or 15 years old at the time.Still vintage Americana at your mothers fingertips.Now good 'ole glory is made in China by the guys who invented the virus that is wreaking havoc all over the world.It probably got bulldozed over when the school house got torn down.So it didn't do Grandpa any good to be all honest Abe Lincoln like.