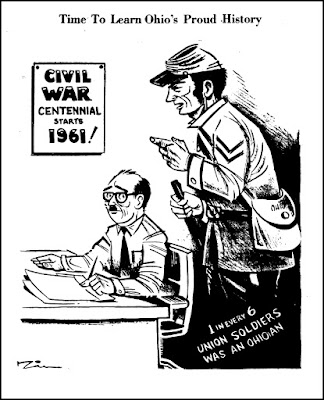 Back in September 1960, the United States was getting ready for the big four-year Civil War Centennial, which would be observed beginning in April the following year.

The Journal did its part to promote Ohio’s strong contribution to the Union forces by running the cartoon above with the editorial below, on Sept. 19, 1960. It’s a nice summary of Ohio’s role in the Civil War.

I can’t say for sure how many of the figures in the editorial are 100% correct, as it seems that some Civil War websites have different figures regarding casualties, etc.
The Ohio History Connection website notes that “over 300,000 Ohioans served in the Civil War, the third largest number of soldiers of any Union state.” The website also notes that “35,475 Ohioans died during the Civil War,” although it does not say on which side they were fighting or if they were all soldiers.
Another page on the same website notes, "Ohio men fought in every major battle of the war. Within forty-eight hours of President Abraham Lincoln's call for volunteers in April 1861, two Ohio infantry regiments already had departed for Washington, DC. An Ohio brigade protected the Union army's retreat at the Battle of First Bull Run in 1861. Ohio regiments also helped secure Kentucky and West Virginia for the North. They participated in the Battles of Fort Donelson, Fort Henry, Gettysburg, Antietam, Fort Wagner, Shiloh, Chickamauga, Chattanooga, and many others.
"Approximately 11,237 Ohio soldiers died from wounds received on the various battlefields, while another 13,354 men perished from diseases. Eighty-four of every one thousand Ohio men who served died in the war. Another forty-four for every one thousand deserted. This was one of the lowest desertion rates in the Union states.”
Anyway, knowing Ohio soldiers did more than their share of the fighting is a good reason to be a proud Buckeye.