The Dodge brand of automobile really had some distinctive advertising back in the 1960s and 70s that set it apart from its competitors. The theme of the cowboy-hatted Dodge Boys, the “Good Guys in White Hats” that were ready to beat the competition to the draw, was an appealing idea that really enhanced the Dodge image, making it memorable and fun.

The ad below from the Lorain Journal of October 5, 1970 – for the Si Gary Dodge and Myers Motors dealerships – is part of that campaign.

Note how the Dodge Boys cartoon logo is perfectly designed to appear on a variety of promotional items – and it sure did. Here’s a small sampling of vintage items from Ebay, including a button, a cup, golf tees and even a hot pad. 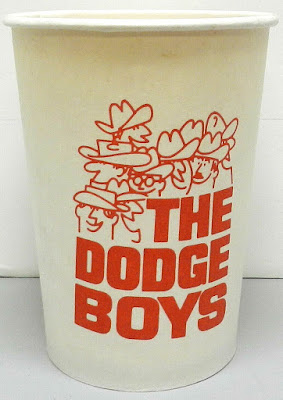 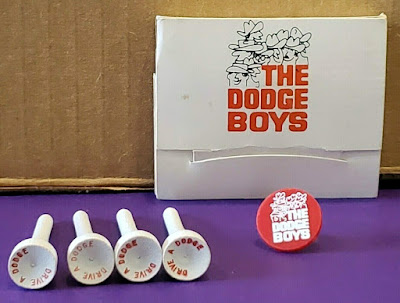 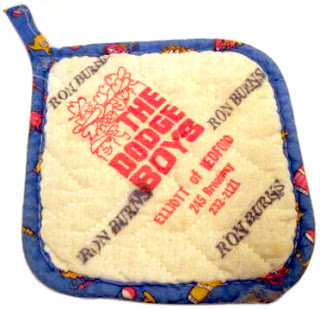 The Dodge Boys concept also worked well in a series of animated commercials.

Two days after the above Journal ran, this Si Gary ad for the Dodge Demon appeared in the paper on October 7, 1970. The ad (most likely designed by the Journal art team) featured the cute Demon logo. 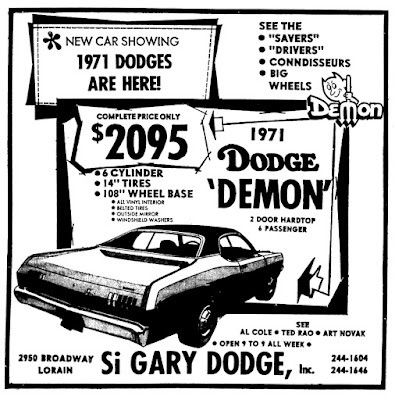 Although the Dodge brand has bounced around a bit between owners, it’s still a great looking line of cars (that belies the abuse the brand took as the car that Al Bundy drove on Married With Children).

Here's a little useless automotive trivia on the "Demon" nameplate.Religious groups complained about the name Demon.And they also hated the cute little pitchfork Devil emblem on the car.They even protested Dodge and various Dodge dealerships about the little Demon all over the country.So Chrysler caved in and the nameplate only lasted 2 years and in 1973 Dodge changed the name to Dodge Dart Sport.The Demon and Dart Sport name were only attached to the semi fastback Dodge coupe.....But it's funny now as Dodge has brought back the Demon nameplate on the Dodge Challenger.And now nobody is saying a single word about its use....Kind of like there are more important things to complain about I guess.

As much as I liked these, I particularly remember the Plymouth commercials with the adorable Judy Strangis as Mean Mary Jean.