Cooper’s Hollow has long been associated with the valley through which today's Cooper Foster Park Road once crossed the Vermilion River, since at one time the Cooper family owned all the land there.

To some, the Cooper’s Hollow name might sound vaguely spooky. It brings to mind other hollows such as the haunted Sleepy Hollow from Washington Irving’s story, or Swift’s Hollow, the setting for the local Gore Orphanage legend.

And Cooper’s Hollow does have a connection to a graveyard – an automobile graveyard, that is.

A quick check through some Vermilion Photojournals from the 1960s reveals that Cooper’s Hollow was a favorite dumping ground for stolen or stripped autos. The Darrow Road/Gore Orphanage Road intersection was ripe for accidents as well.

Here’s a small sampling of news items mentioning Cooper’s Hollow from the pages of the Vermilion Photojournal. Not all of them involve cars.

This editorial is about shooters doing a little illegal target practice in Cooper’s Hollow from the November 11, 1965 Photojournal. It mentions Gobler’s Knob, as being at the top of the cliff overlooking the valley. 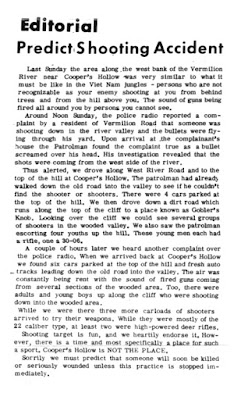 This item from the May 5, 1966 Photojournal shows a car stolen from Yepko’s Tavern in Vermilion that was stripped, and dumped in Cooper’s Hollow. 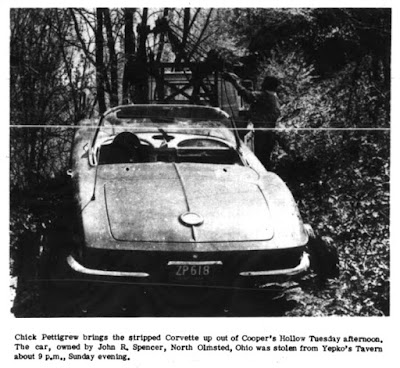 The car in this October 6, 1966 Photojournal article just missed going over the cliff. The article mentions Gobler’s Knob as well. 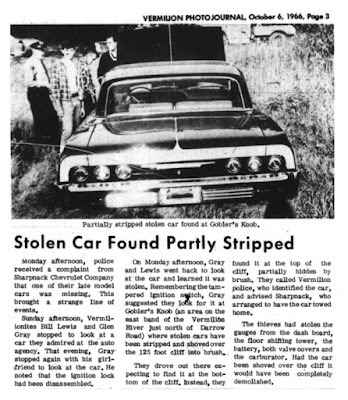 This article from the November 24, 1966 Photojournal notes that ‘thieves tried to push this car down the abandoned road into Cooper’s Hollow.' 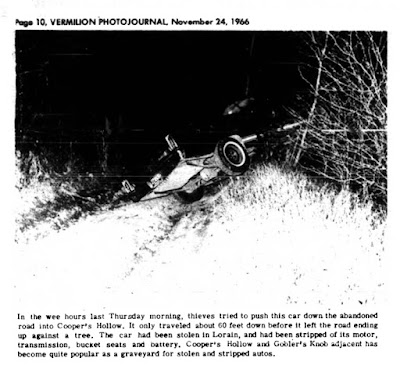 The Vermilion Photojournal of December 22, 1966 included this photo of yet another car pushed over the cliff at Gobler’s Knob. 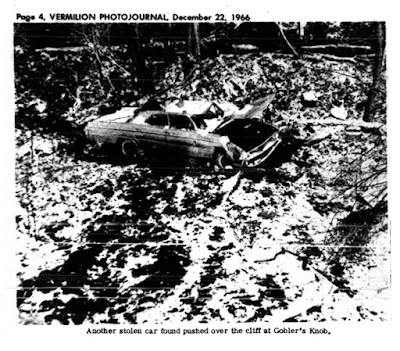 The car shown in this photo from the October 3, 1968 Photojournal just missed going over the cliff. 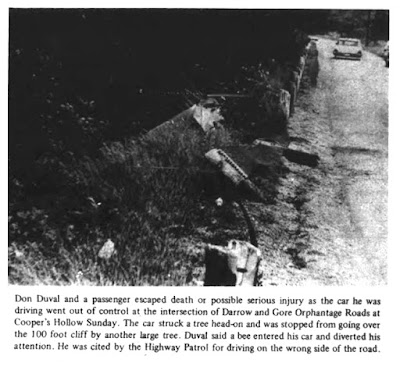 ****
A June 1966 article about a tragic drowning not far from Cooper’s Hollow makes a reference to a swimming hole located “about a half-mile north of the old bridge.” So it looks like the Cooper Foster Park bridge might have still been standing at that point, although the road had been abandoned according to a November 1966 article posted above.
Posted by Dan Brady at 4:29 AM