Looking for something interesting to do? Take an autumn walk in the Bacon Woods in the Vermilion River Reservation, and enjoy a little piece of hidden history: the abutments of an old abandoned bridge.

Longtime contributor and local historian Dennis Thompson first told me about the abutments. As Dennis pointed out, many years ago the road we know today as Cooper Foster Park Road used to cross the Vermilion River, instead of dead-ending at Vermilion Road and trailing off into the trees as a driveway as it does today.

Dennis noted that the road “crossed Vermilion Road, wound around an S curve and dropped down the valley and across the river.

"The Coopers owned from Vermilion Road to the river,” said Dennis.

You can see the old road crossing the Cooper property on these vintage township maps, right where the “34” (for Township Lot 34) is.

Here’s a 1952 aerial view of the bridge from the Historic Aerials website. Note that it’s all still farmland on both sides of the road, leading up to the bridge. 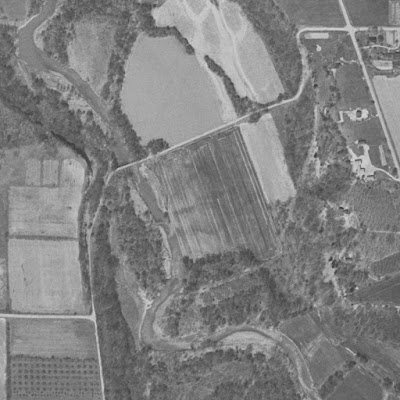 But by 1969, the bridge is gone, and the road appears to be abandoned. 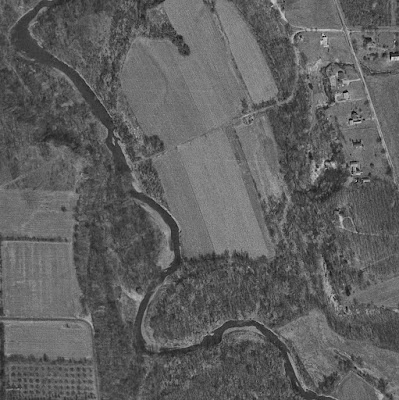 Here’s a modern view courtesy of Google Maps. Despite the labeling by Google Maps, today the Vermilion River does not follow the same route as it did as it did in the 1969 photo. 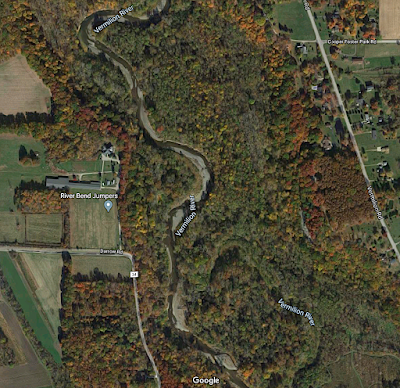 To see the old bridge abutments, follow the Coopers Hollow Trail as seen on the map below, (courtesy of Lorain County Metro Parks). It’s the trail that's shown in yellow. Note that you have to walk part of two other loop trails to get to it – but it’s worth it. 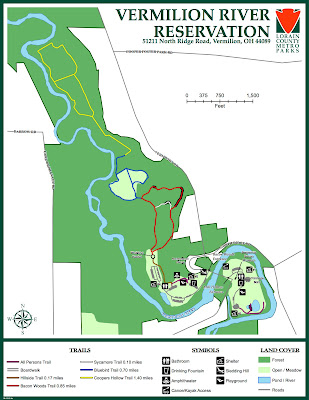 This very rough overlay of the 1930 map and a portion of the present Park map shows approximately where the bridge was located relative to the hiking trail. 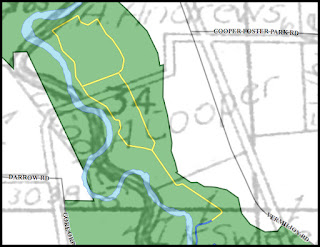 Next: Into the woods
Posted by Dan Brady at 4:40 AM

Have heard rumors about that bridge - and actually started out to try and find it waaaaay back in the day via th emill hollow trails, but ended up turning around.

What changed the course of the mighty river; certainly not Superman.

I would like to know too,what happened to the river?And the bridge?Were the Coopers 1%ers,who paid for its removal?Or did they pressure the state to have it torn down?

I remember riding across the bridge with my dad when I was a kid in the 1950s. With the steep approaches to the bridge it seemed especially wild. If I remember correctly it was a single lane bridge and seemed pretty rickety even then. After the bridge was closed fishermen would park along Darrow Road and walk the old road down to the river to fish -- maybe they still do. Probably about 30 years ago the metro parks employed a ranger named Roy Hartman who often led rather adventurous hikes through the various parks. Back then I joined him once for a hike to the old bridge site. Then there was no path then, it was a bushwhack. I was told that on the the small rise on the east side of the cliff just before you descend into the valley many Native American artifacts were found. A house now stands on the site.