When it was announced that the Oberlin Inn was going to be torn down, I made a few trips out to Oberlin to get some “now” shots (below) in 2014 and 2015 to compare with the vintage postcards. The hotel portion of the complex went first.


About a week ago, when I learned that that the last remaining portion of the Inn was being demolished, I headed out to Oberlin on a Sunday afternoon and grabbed the shot below. 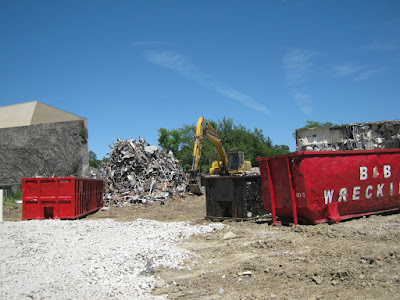 I also swung around to the back of the property to see what shape the 1969 addition was in. Much of it was gone, and it was only a sad shadow of how it looked on the vintage postcard.
I’ll have to grab a photo of The Hotel at Oberlin at a later date for a “then and now” comparison with the original Oberlin Inn.
Posted by Dan Brady at 6:00 AM