(You can read more about Steven Harris, including his Chronicle-Telegram obituary, at this link on www.findagrave.com. It also explains the apparent confusion as to the spelling of his name.)

For Memorial Day 1937, Quinn rode in a special float prepared by Ray Urbanski and Luther Septor. 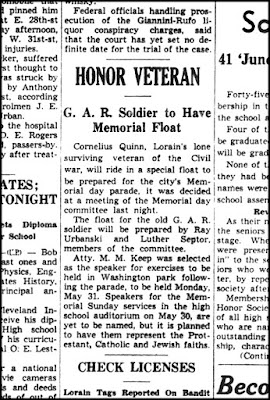 Best of all, the Lorain Journal sent reporter Jean Weaver out to interview Quinn. Her enjoyable article below appeared on the front page of the paper on June 1, 1937. 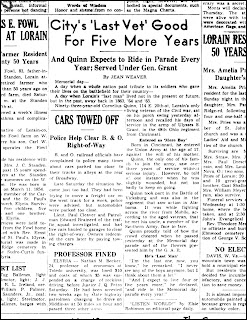 A day when a whole nation paid tribute to its soldiers who gave their lives on the battlefield for their country.

Ninety-three-year-old Cornelius Quinn, 114 E. 20th-st, Lorain’s only living veteran of the Civil War, sat on his porch swing yesterday afternoon and recalled the days of service in the army of Ulysses S. Grant, in the 48th Ohio regiment from Cincinnati.

Entered as ‘Mere Boy’
Born in Cincinnati, he entered the Union Army at the age of 17, against the will of his mother.

Quinn, the only one of his family to join the army, saw over three years of service without serious injury. However, he told of one instance when he was slightly wounded, but not too badly to keep on going.

Quinn took part in the Battle of Vicksburg and was also in the regiment that saw action in Alabama. It was while fighting across the river from Mobile, according to the aged veteran, that he met his uncle, a member of the Southern Army, face to face.

Quinn proudly told of how the crowd cheered when he passed yesterday at the Memorial day parade and of the flowers presented him by the G. A. R.

“And I expect to live four or five years more,” he declared, “and ride in the Memorial day parade every year.”


****
The following year on Memorial Day 1938, Cornelius Quinn rode in the parade with George Fout, commander of the Disabled Veteran’s association, who also gave the principal address. Unfortunately, Quinn was unable to take part in the Washington Park ceremonies.

Did Quinn take part in any more Memorial Day observances? Stop back tomorrow to find out in the final installment of my look back at his unusual and exhilarating life.
Posted by Dan Brady at 6:04 AM