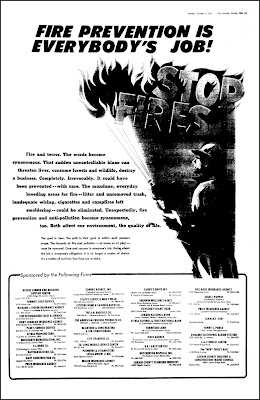 The week is almost over, so it’s about time that I posted this. It’s the full-page Fire Prevention Week ad that ran in the Lorain Journal on October 3, 1971 – fifty years ago this month.

You can tell it’s from the 1970s, because of the fairly dramatic, stylized graphic. No Sparky the Fire Dog in this ad (unfortunately).

Is Fire Prevention Week still officially acknowledged in the newspapers? It’s only a once-a-year event, but a pretty important one at that – so I hope it is.

As usual, it’s interesting to see who the ad sponsors are. It looks a few of them are still around, such as Somers Agency, Janasko Insurance and the successors to the banks listed.

But forget about picking up a burger at Sandy’s Drive-in, or stopping for a snort at the “New” Eddie’s Bar.

One of the features of Fire Prevention Week was an annual poster contest for school children sponsored by the Ford Motor Company.

Here’s an ad announcing an art show of the posters at Midway Mall. It ran in the Journal on October 5, 1971.

If I remember correctly, the winners received a savings bond and a tour of the Lorain plant. (I should remember, because I was one of the winners when I was in eighth grade in 1972. But more about that next year!)

Since Sparky the Fire Dog was not to be seen in the 1971 Journal ad above, we’ll include the fire-prevention pooch in this post by reaching back to the time of his origin.

Here’s a great advertisement courtesy of the National Fire Protection Association archives. It’s from when Sparky was first introduced, circa 1952. He’s paired with fellow fire-prevention mascot Smokey Bear. (Hey, why is Smokey wearing a long-sleeved shirt, instead of being bear, I mean, bare chested?) 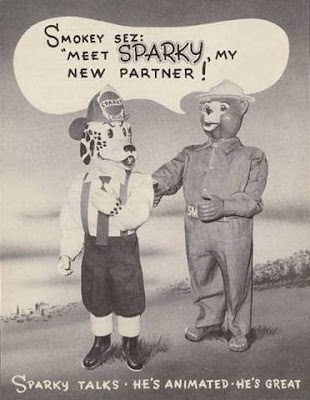 The ad notes that “Sparky talks – He’s animated – He’s great.”
What is that all about? From what I can see, the ad is referring to the Sparky suit shown in the ad, which when worn by firemen teaching children about fire prevention, would allow Sparky to ‘come to life.’
Here’s a vintage newspaper article from the Petersburg Progress-Index of October 1, 1958 showing the same Sparky suit. 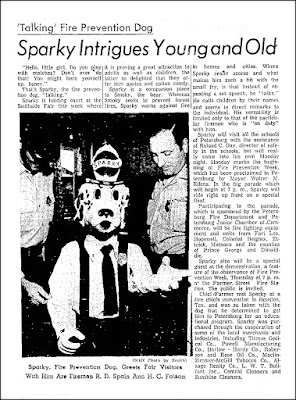 Anyway, for more fire prevention information, visit the National Fire Prevention Association website, as well as Sparky’s own doggone website.
Posted by Dan Brady at 2:34 AM

Hey Dan - this is a little bit off the "Fire Prevention" topic but when you mentioned a poster contest for school kids in October and it being close to Halloween I was wondering if you had any info on the window paintings that were done on Broadway around Halloween. I'm pretty sure they were done by school kids and judged at some point. I always thought it was kind of neat to walk down Broadway and look at all the various Halloween scenes. I'm guessing the time frame was mid 60's - early 70's. Thanks TB

Hi,
I remember the Halloween storefront window painting well, I wish I had some information about it. I’ll have to look at the old newspapers more closely to see if I can find an article or something. I remember at Masson Elementary one year in the late 60s, my friend Jeff and I had our picture chosen (by our class?) and we painted it in a window on Broadway. We didn’t win the overall contest but it was pretty fun. I also remember Jeff’s father driving us Downtown in a Volkswagen Beetle.

Hey Dan - Congratulations on winning your classroom contest and thanks for the update...Todd