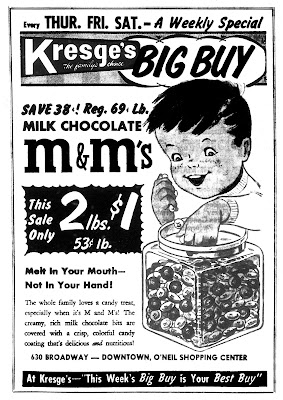 With Kmart in the news, it's appropriate to post this ad for Kresge's, which ran in the Lorain Journal on June 1, 1960. Sadly, the Super K on Leavitt Road is closing later this year, bringing the company's longtime presence in Lorain County to an ignominious end.

I'm fairly upset because Kmart is my mother's favorite store. She's been a loyal customer for years, and like many other local senior citizens, felt comfortable shopping there for groceries and almost everything else she needs. She also enjoyed mingling with the other shoppers, with whom she had much in common.

Yes, the store was a little outdated and I rarely shopped there myself. But it was a good fit for economically depressed Lorain, and was always busy when I did go in there.


****
On a happier note, the vintage Kresge M&M’s ad is also timely because the 75th Anniversary celebration of that iconic candy has been going on since February of this year.

Who doesn't like M&M's? It's still probably the best candy ever made.

To celebrate the big event, the company is selling some M&M's in packages that feature the original advertising mascots through the years. Not surprisingly, a few of these packages (below) magically flew into my shopping cart.


I'm partial to the peanut version myself. And, of course, the blue ones are the best.
Here’s a hilarious M&M’s commercial from the early 1970s that I remember very well. Remember these card-playing cowboys? “These cards are marked!” “They’re a mess!” The commercial also features early animated versions of the two current, popular M&M’s mascots.