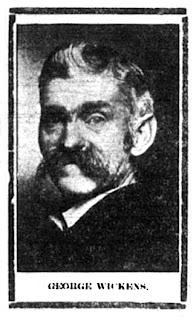 When former Lorain mayor George Wickens passed away on March 19, 1908, it was a major event in Lorain, even though today – 104 years after his passing – his name is never mentioned when the honor roll of Lorain's greatest and most famous citizens is read. And that's a shame – because it isn't necessary for someone to have achieved national prominence to have been of great importance to Lorain.

Excerpts from the newspaper coverage surrounding his funeral provide a glimpse of how beloved he was to the city.

On the front page of The Lorain Daily News of Friday, March 20, 1908, the funeral arrangements were described. "The funeral arrangements for the burial of George Wickens have been completed and indications are that the funeral will be the largest ever held in Lorain," the lead article stated. "All business houses of the city will be closed from 12:30 until 2:30 on Monday out of deference to the deceased."

A public viewing was scheduled for Saturday between the hours of two and nine. "At this time Lorain and vicinity will be permitted to look upon his face and render this tribute of respect," the article stated. Sunday was reserved for the family to be alone with the body.

The family had a special wish regarding floral arrangements. "Carrying out the habit of our beloved one, we have arranged that a vast number of floral contributions be delivered to as many of the sick and unfortunate of the city as can be found," they asked.

Elsewhere on the same front page under the heading WICKENS IDEAS BE CARRIED OUT TO THE LETTER,  it was noted that Wickens' final ideas "as to beautifying the cemeteries and the city will be carried out as far as possible by the service board, and improvements inaugurated by Mr. Wickens and now under way will be carried out to the letter."

In addition to the cemetery improvements, there was a specific idea that George Wickens had for the area around City Hall. As the same article stated, "The comfort station to be erected on the square, another improvement which Mr. Wickens fathered, will no doubt be carried through, as the service board has already asked that an appropriation be made for the construction of the station."

The business community also made their feelings known by passing resolutions of respect that were printed on that same page. It noted, "George Wickens, our fellow citizen was a true American, actuated by noble impulses and desirous of performing in full his duties to society, loved by all his friends and appreciated by all who knew him.

"The City has lost a valuable citizen whose place cannot be easily filled, and we, his associates feel that in thus publicly recognizing his worth and merit, we do but extend him his just due.

"His memory too, will be an inspiration to all those who work for the uplifting of our City."

The Lorain Daily News of Saturday, March 21, 1908 continued the coverage. WHOLE CITY WILL MOURN FOR WICKENS was the heading under a front page article. Every business house was to be closed on Monday afternoon for the funeral, as well as city offices. Schools were to be closed Monday afternoon. The shovel works was even working on that Saturday so that the plant could be closed from twelve to four on Monday.

Members of the fire department planned to attend the funeral services as a body, as well as the police department.

The trustees of the public library issued a special resolution that was part of that same article. It stated, "Resolved that in the death of Mr. Wickens this Association has lost one of its most useful members. Identified with the earliest efforts to establish a free public library in Lorain, Mr. Wickens gave his time and thought most generously to promote the cause. He was never called upon to assist in the work that he did not promptly respond, often at great inconvenience and sometimes actual loss to himself.

"It should therefore be known to all the people of Lorain that the Public Library as it now stands is in a sense a monument to the public spirit and noble character of George Wickens."