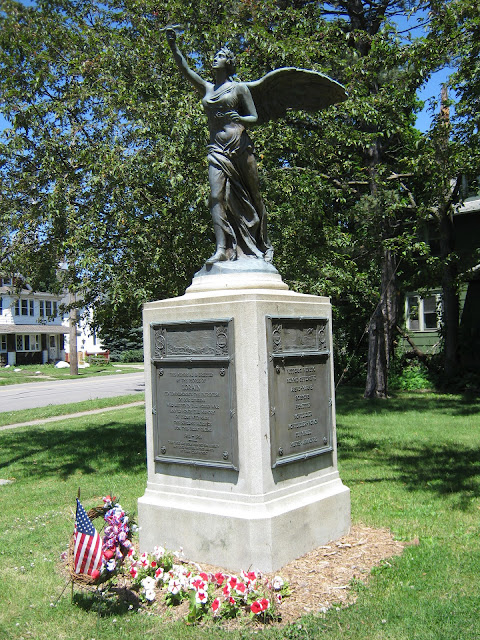 A little anniversary came and went quietly last month – the 90th anniversary of the dedication of the soldiers monument (Miss Victory) at Victory Park at West Erie Avenue and Fifth Street.

It was on April 6, 1922 that Lorain paid tribute to her sons who served and died in World War I.

As the article on the front page of The Lorain Times-Herald (shown at left) explained, "Two hundred wounded and forty-two dead were eulogized together with those who sacrificed their personal interests in the interests of Democracy when ex-service men and their friends and relatives unveiled a soldiers' memorial on West Erie-av. at 5th-st.

"With the colors flying at full, civic, patriotic and fraternal organizations, together with their auxiliaries, paraded on Broadway to the scene of the memorial, preliminary to the day's chief event."

On the following day, the newspaper described the festivities. The front-page article stated, "Unveiled with all the honors a grateful city could pay, a memorial to the gallant deeds of Lorain soldiers in the World War was bivouacked late yesterday afternoon on Erie-av. at 5th-st.

"The highest honors of the American Legion, department of Ohio, did homage; nearly a score of gold-star mothers and close relatives of Lorain's forty-two dead witnessed the granite and bronze composition typifying the city's reverence and respect. Mayor William F. Grall arose from a sick bed to be present while thousands trudged from all sections of the city to witness the birth of that which is the personification of liberty, equality and honor."

How soon we forgot "lest we forget"

Nice photo of Victory Park!
Presently, I'm happy to see that it didn't take Mother Nature very long to reclaim the land east of the park that the house was on.
Will the F word off on west side of the veterans' new building disappear on or before Pride Day? I hope so.

Where is Victory Park? I know the address, but cannot locate it on the map, or aerial view, or streetview. Thanks!

What’s interesting is that although the small, triangular park at West Erie and Fifth is commonly known as Victory Park because of the Big V, that’s really not its actual name – thus you won’t find it on a map. But at one time, there was a Victory Park out in South Lorain near where the water tower is now located.