So what was playing on area movie screens, sixty years ago this week?
A glance at the theater listings in the January 2, 1961 Lorain Journal shows that although westerns were beginning to fade in popularity (possibly because of the glut of them on TV), there were still some good ones being made for the big screen.
The Magnificent Seven (1960), one of the greatest westerns of all time, was playing at Amherst Theater. 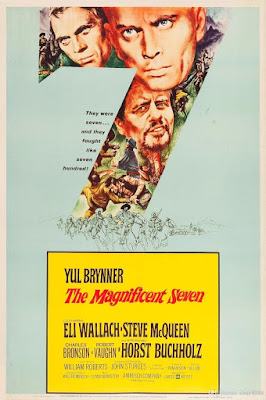 I still find it unbelievable that anyone believes the 2016 remake (with its largely no-name but more diverse cast) was superior to the original, which starred Yul Brynner, Eli Wallach, Steve McQueen, James Coburn, Charles Bronson, and Robert Vaughn. The actors playing the seven guns-for-hire in the original version did such a great job of creating full-fledged characterizations that it's impossible for the viewer not to feel bad as they are picked off one by one during the climatic battle. 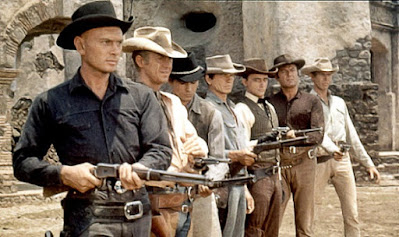 The number 7 also figures strongly in the other great western on the Journal movie page. That’s because ‘Seven' is the name of the character that decorated WWII war hero Audie Murphy plays in Seven Ways From Sundown (1960) which was showing at the Tower Drive-in. 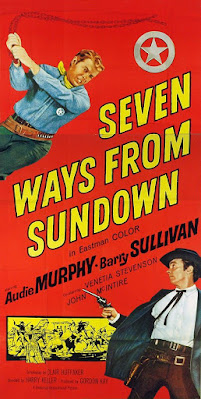 In this one, Audie plays a very green, young Texas Ranger trying to bring in the most likable, slickest bad guy of all time, played by Barry Sullivan. It’s another Western with a final showdown that chokes you up a bit. (This movie shows up on GRIT TV regularly, so if you’ve never seen it, be sure to catch it.) 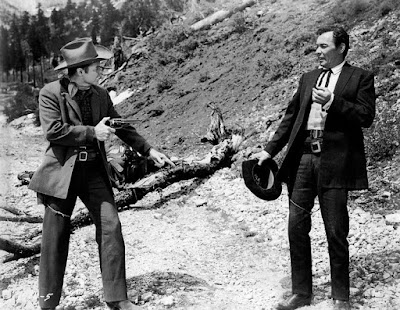 The second feature at the Tower Drive-in starred Gina Lollobrigida in Where the Hot Wind Blows. (Flintstones fans remember that she was spoofed on the prehistoric cartoon comedy as an Italian maid named Lolobrickida.)
Elsewhere in the area, Desire in the Dust (no, it wasn’t a Western) was playing at the Dreamland; Butterfield 8 with Elizabeth Taylor was at Avon Lake Theater; the Academy Award-winning Ben Hur was at the Ohio; ol’ ski-nose himself Bob Hope was starring in The Facts of Life at the Palace; and Esther and the King with Joan Collins was at the Tivoli.
Yup, you know the 1960s were well underway, as there were no more Bowery Boys films in the Lorain movie screen listings.
Posted by Dan Brady at 4:27 AM

I probably saw DESIRE IN THE DUST at the Dreamland, although I don't remember. I do remember seeing THE MAGNIFICENT SEVEN at the drive-in, possibly the Lorain; I'm assuming, as they have no ad posted, that they were closed for the season.
Happy New Year, Dan!

Happy New Year to you too, Alan!

Was it common for all movie theaters to show different movies back then? I couldn't imagine the crowds today when a new blockbuster movie came out and was only available at one theater.

Once the Supreme Court decided in the late 1940s that movie studios couldn’t own the theaters that showed its films, I think there was more flexibility as to what could be booked. But it seems like in a city like Lorain, which had 4 or 5 movie houses at one point, it was still likely that a film would only be booked in one. However, the same film might also be at Avon Lake Theater, or in one of the Cleveland theaters (or a suburb) for sure.

I’m guessing that there must have been some sort of exclusive agreement, because the big blockbuster would hit the major theaters/markets first, and then play the smaller ones much later in its run.

I think you're right about the sequencing of the release dates. First the big houses in the big cities, then the second-run houses and the smaller cities. For example, Magnificent Seven was released in October 1960 and made it to Amherst the following January.

Seeing films on the big screen was unforgettable; there is nothing like it today. Even the cartoons were awesome. (Of course, I was much younger at the time.)

Also, many films were rereleased a number of times; I remember seeing I WAS A TEENAGE WEREWOLF/I WAS A TEENAGE FRANKENSTEIN (both 1957 releases) on a double bill in 1971, although both had shown on tv many times in the intervening fourteen years.

How ironic Daniel that I just picked up "Butterfield 8" on dvd as part of a still sealed Elizabeth Taylor 4 movie collection a couple of days ago at a thrift store.All for the amazingly low price of $5.00....But dvds are getting more rare and obsolete by the day.Old school technology....I bet people who lived back then never thought that 30-40 years later,that they would be able to actually own the movie that they saw on a screen when they were younger.And now this is getting to be a thing of the past too.

Hi Dan,
Any idea what the address was for these Lorain buildings.... Argyle and Svete Buildings from a Paul Rissmann architect publication circa 1912? Thanks.