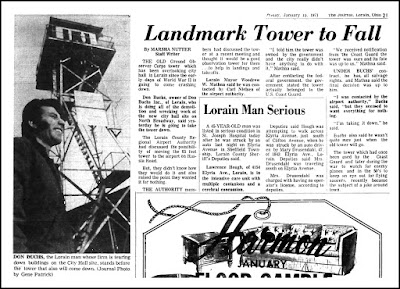 As noted on several recent blog posts, the year 1971 was a big one for change in Lorain. The preparation for the construction of a new City Hall required the demolishing of many buildings and structures that residents had gotten used to seeing.

One of those iconic structures was the old Civil Defense Tower that stood behind City Hall.

It had originally served as the life-saving tower by the United States Coast Guard station in Lorain, but was removed in the early 1950s to make room for a new small boat harbor. Consequently, Forest J. Greenshields, the director of Lorain’s Ground Observer Corps, obtained it for his team of 24-hour volunteers scanning the skies for enemy planes.

But by 1971, the old tower was no longer being used and had to go, to make way for the new City Hall. That’s the subject of the article above, which appeared in the Journal on January 15, 1971.

As noted in the article, Don Buchs Inc., the company doing the demolition, had the salvage rights. The Lorain County Regional Airport expressed interest in the tower but didn’t want to pay for it and didn’t know how it was going to move it.

I wonder if it ever ended up anywhere other than the scrap heap?

I didn't know that the Tower had once been part of the Coast Guard station - is there any info on how/when and for how long it was manned after being transferred to the GOC? When we moved to Lorain in '65, I remember being told that it had been closed for some time then.

Mike, the GOC Wiki page notes that the program officially ended in 1958, so maybe Lorain stopped manning it around then. I’ll have to watch for an article that mentions Lorain phasing out its volunteer program.