The article above, which appeared on the front page of the Lorain Journal on January 2, 1961 didn’t say. It did feature a photo of the first baby born at St. Joseph Hospital in the New Year – Jeffery Rich, son of Mr. and Mrs. Joseph Rich. But they lived in Amherst.

There was also a photo of the last baby born at St. Joe’s in 1960 – James Owen Coppinger, son of Mr. and Mrs. James Coppinger of Avon Lake.

Thus the First Lorain Baby in 1961 wouldn’t be revealed until a few days later, when the full-page ad below appeared. Theresa Marie McDermott, daughter of Mr. and Mrs. John C. McDermott had the honor. 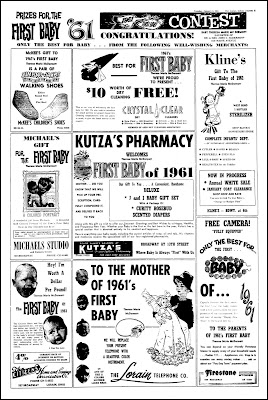 I like the ad for the Citizens Home and Savings Association, with the ‘winning’ baby happily exclaiming, “Hey! I’m Worth A Dollar Per Pound!” while another baby observes, “I was too late.”

Anyway, Theresa and her parents received some nice goodies, including walking shoes from McKee’s; a West Bend 8-bottle sterilizer from Kline’s; a portrait from Michael’s Studio; a camera from Firestone; and a new telephone from the Lorain Telephone Company. (What, no new hat for the father?)

In case you’re wondering (like me) what the West End bottle sterilizer looked like, here’s a picture of one. It’s basically a pot. 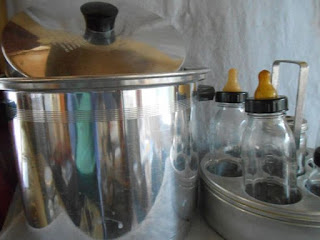 Anyway, perhaps one of these years this charming New Year’s tradition of celebrating Lorain's first baby will be revived by the Morning Journal and Mercy Health, with the generous cooperation of some local businesses.

DAN- This is a shameless plug for my baby brother, Phillip Eric Hopewell, who turns 59 today!

Hi Alan! Nothing shameless about it (especially since this is Baby Week on the blog), hope young Phillip Eric has a Happy Birthday!