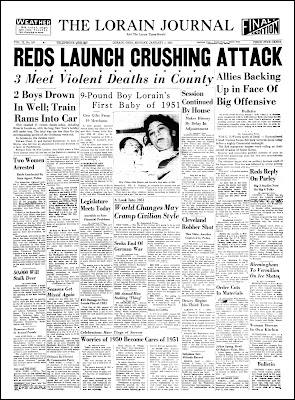 There’s a lot of bad news crammed onto the front page of the January 1, 1951 Lorain Journal.

But amidst all of the reported tragedy and crime is the happy article about Lorain’s first baby of 1951: a boy born to Mr. and Mrs. Pabon Julio Rentos of 3325 W. 12th Street in Lorain.

As the article notes, "Thanks to Lorain merchants, the Rentos baby’s every need will be satisfied.

“All the things that are necessary to keep him comfortable, well-fed and happy will be at his disposal, provided by 19 Lorain merchants. His mother and father will also be feted in a manner befitting the parents of the year’s first baby.”

Elyria’s first baby born at Elyria Memorial hospital was a daughter born to Mr. and Mrs. Thomas Rafter of Grafton.

Elsewhere on the front page are a lot of interesting little items.

Julius Spang, founder of the J. Spang Baking Company had just passed away the day before at the age of 97; four Birmingham High School students had skated on the frozen Vermilion River from Birmingham to Vermilion, a distance of about seven miles; Bushman, world famous gorilla, was found dead in his cage at the zoo in Chicago; and Ohio’s deer hunting season was opening the next day, with ‘nimrods’ permitted to ‘stalk the deer trails in 19 of the 88 counties in the state until the season closes Jan. 5.”

Gee, I heard Bugs Bunny refer to Yosemite Sam as a nimrod in a cartoon – Rabbit Every Monday (1951) – and never knew that it meant ‘hunter.’ It’s right at the 1:49 mark in this clip.

Anyway, thanks to Bugs Bunny’s use of the word in various cartoons, Merriam-Webster says that the meaning of ‘nimrod' has evolved to include ‘jerk’ or ‘idiot.’
Posted by Dan Brady at 4:31 AM

Bugs' writers came up with some other neologisms like this. I remember they turned "moron" into "maroon." I wonder where "nimrod" came from - possibly a new version of "numbskull."

It's also possible that the writers were just reflecting the current lingo, of course.