Yesterday I wrote about some houses on Root Road in Lorain, built by the same builder, that seemed to symbolize the average, middle-class neighborhood of the 1950s.

Well, today’s post is about a 1960s housing development – Rock Creek Run, in Amherst – that aimed a little higher, and had wish fulfillment as its advertising theme. "Every Woman’s Dream... A Home in Rock Creek Run” is the headline for this pair of ads. The ad below ran in the Journal on November 5, 1960. 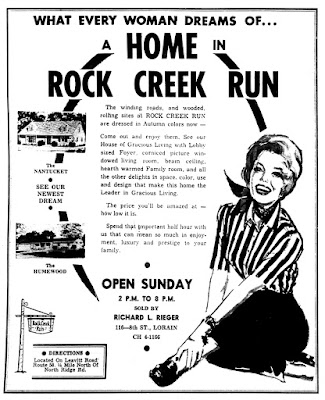 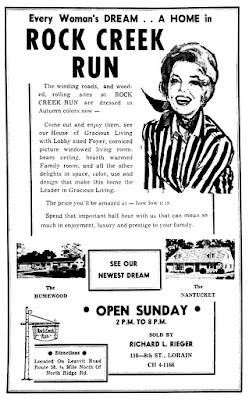 Gee, the woman in the illustration kind of reminds me of actress Dorothy Malone (who I’m familiar with from her many appearances in Westerns). 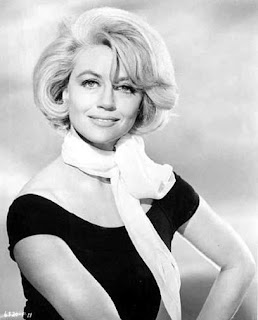 Anyway, the ad copy for the Rock Creek Run ads still rings true today, with the "winding roads, and wooded, rolling sites.” It’s still a charming area.
Best of all, it still has its original name and signage – 60 years later. 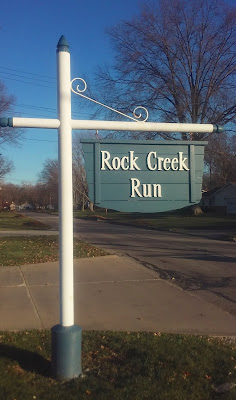 The resemblance to Dorothy Malone is striking; perhaps based on a publicity photo?
I remember going past the Rock Creek Run sign as a child, and picturing a bunch of kids running alongside a creek.
Ah, a child's imagination...

We lived there briefly when in between houses. My Dad built his first house at 6420 Oberlin Rd in 1960. Back then it was just scattered houses on Oberlin Rd and fields to the west. We would walk through the fields to explore the east quarries. The family grew rapidly and Dad moved us to Rock Creek Run around 1966 while he planned to build a new house. It was a nice ranch house with full basement The build never happened and the family moved to a large home on North Main St in Amherst. I didn't move with them as I got married at the time.

I built my own bedroom in the basement of the Rock Creek Run house. One night I awoke to a scene from Hell! A loud screeching noise startled me and the room was filled with hot steam. I stepped into hot water on the floor! The heating system had burst something.

Interestingly, on one of the last times Dad visited from Florida before he passed we were talking about the places the family had lived. Dad had forgotten about Rock Creek Run! He eventually did build another house on Balsam Drive where he lived until he retired to Florida.

Alan, there was a small creek It was on the east edge of the allotment. Past it was Dewey Rd which used to go all the way to Cooper Foster Park Rd before the highway was built.

My mom lives there now