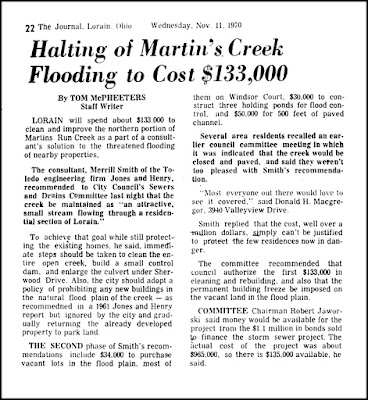 The article above (which appeared in the November 11, 1970 Journal) about proposed improvements to Martin’s Run brought back some memories.

The creek, which still runs through much of the west side of Lorain, was a favorite place for my brothers and I to explore when we first moved to Skyline Drive in the mid-1960s.

Back then, the creek was still in its original, wild state and we loved to put on a pair of rubber boots and go explore it.

To get to it, we had to cross a vacant lot of high weeds and then slowly climb down a fairly steep cliff. Once there, you could catch all sorts of things: crayfish, turtles, frogs, minnows, etc. Of course we brought all of these unfortunate creatures home, where they never lived very long.

At the east end of the length of the creek where we played, there was a large storm sewer that emptied into it. Sometimes kids would go into it with a flashlight and go exploring. I never did; I was afraid I’d get lost in there.

Sometime we would follow the creek further east, where it ran behind houses and you risked trespassing if you went too far. There were some areas in the woods that made a good hangout for older kids who wanted to smoke. I remember turning back one time after unexpectedly encountering ‘big kids.'

Martin’s Run right next to Leavitt was eventually ‘improved’ and it was never the same. There was no fun to be had walking around on a homogenized, concrete shore where nothing grew.

I think that ‘our’ portion of Martin’s Run was converted into a drainage ditch sometime before the part of the creek discussed in the November 1970 Journal article. At least that’s the way I remember it.

Back here, I wrote about the answer to the eternal Lorain question: is its Martin Run or Martin’s Run?

What's childhood without a creek?

Every now and then I would catch a bucket full of crayfish.Then my Mom would run me up to Garwell's to sell. I still remember once getting 79 cents for a bucket full. Lots of money for a kid back then.The money would all end up at I believe it was Steve's Meat Market next to Willow Hardware.He had a great selection of candy!

Hi Bob! Great reminisce! We used to catch crayfish there too and bring them home, but it never occurred to us to sell them!

I put my crayfish in our family fish tank. Obviously, an 10 year old kid wouldn't have a clue that crayfish are carnivores. It didn't take long until the "fish" tank became a tank without fish and I had some explaining to do.

One time some neighborhood kids and I procured an inflatable raft (I have no idea where we would have gotten it from) and paddled through the tunnel where it went under routes 6, 611, and the railroad tracks all the way to where it emptied into Lake Erie. I knew to bring a can a bug spray because the roof of the tunnel was a mass of spiderwebs with spiders dropping down into the raft. I guess we had flashlights to spot the spiders to spray them. A close as I ever felt to feeling like Tom Sawyer.