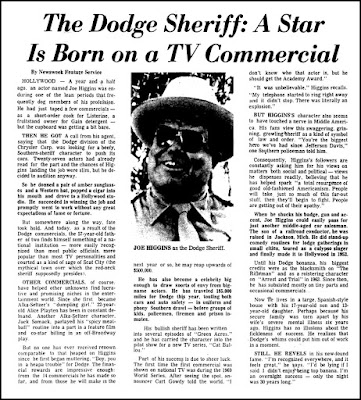 As a follow-up to my post a few weeks ago about Dodge advertising circa 1970, here’s an interesting article from the November 8, 1970 Journal about the Southern sheriff featured in Dodge commercials at that time. The actor’s name was Joe Higgins and he made the character so popular that he had appeared in 14 different commercials at that point.

Why was he so popular? As the article notes, “Higgins’s character also seems to have touched a nerve in Middle America. His fans view this swaggering, grinning, growling sheriff as a kind of symbol of law and order.”

Maybe it’s time to revive the character in these turbulent times when law enforcement could use a friendly, but authoritative, face.

Anyway, here’s one of those commercials courtesy of YouTube. It’s pretty funny.

Later the character evolved into the “Dodge Safety Sheriff” and Higgins made public appearances all over the country on behalf of Dodge, promoting safe driving.

It’s funny how much the Dodge Sheriff character seems to have inspired Jackie Gleason’s “Buford T. Justice” character in those Smokey and the Bandit movies.
Posted by Dan Brady at 3:07 AM