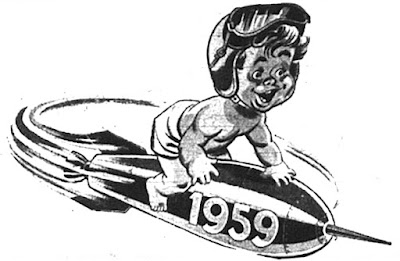 Well, we know that my older brother was Lorain’s First Baby of 1958. So who was the First Baby of 1959?
That honor went to Kimberly Jo Saltzman, daughter of Mr. and Mrs. Richard Saltzman. Here’s the article that appeared on the front page of the Journal on January 2, 1959. It’s nice that the last baby of 1958 – Jean Marie Baker – made it into the photo too, along with her mother, Mrs. John E. Baker. 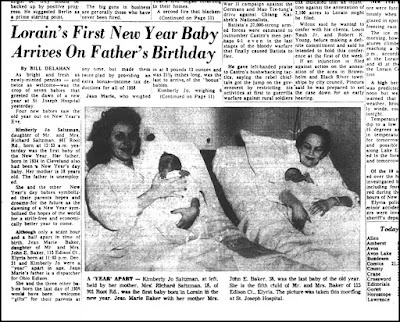 And here is the obligatory Journal spread showing all the goodies that Kimberly and her parents received from the local merchants, which included Kline’s, Kutza Pharmacy, Henry’s Food Center, Ideal Dairy, Sylvester Drugs, Michaels Studio and Ohio Edison. Hey, even Brady’s Restaurant got into the act. 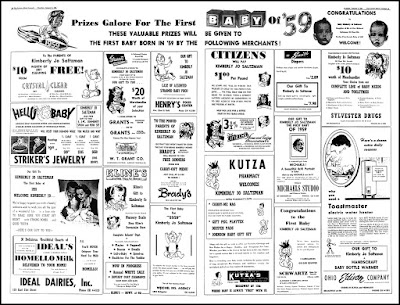 By the way, while preparing this post, I noticed that the address of the Saltzmans in 1959 – 901 Root Road in Lorain – is that of a fine, old landmark home that is obviously one of the oldest in that area.
But what about Lorain's first Baby of 1969 – who is experiencing his/her 50th Birthday today?
That honor went to Laura Marie Kachure. You can read all about her in the article below, which appeared on the front page of the Journal on January 2, 1969. 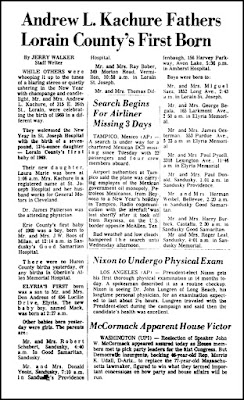 The article also includes the names of the First Babies of 1969 for Erie County and Elyria.
Judging from the article's roll call of bouncing babies, it must have been a busy night at St. Joseph Hospital, Good Samaritan Hospital in Sandusky, Amherst Hospital, Elyria Memorial and Sandusky Providence.
Posted by Dan Brady at 4:58 AM