Here's the full-page article I mentioned yesterday (below). Written by Lou Kepler, it ran in the Journal on September 7, 1961 and reveals the unusual history of the house – which is much older than I imagined. 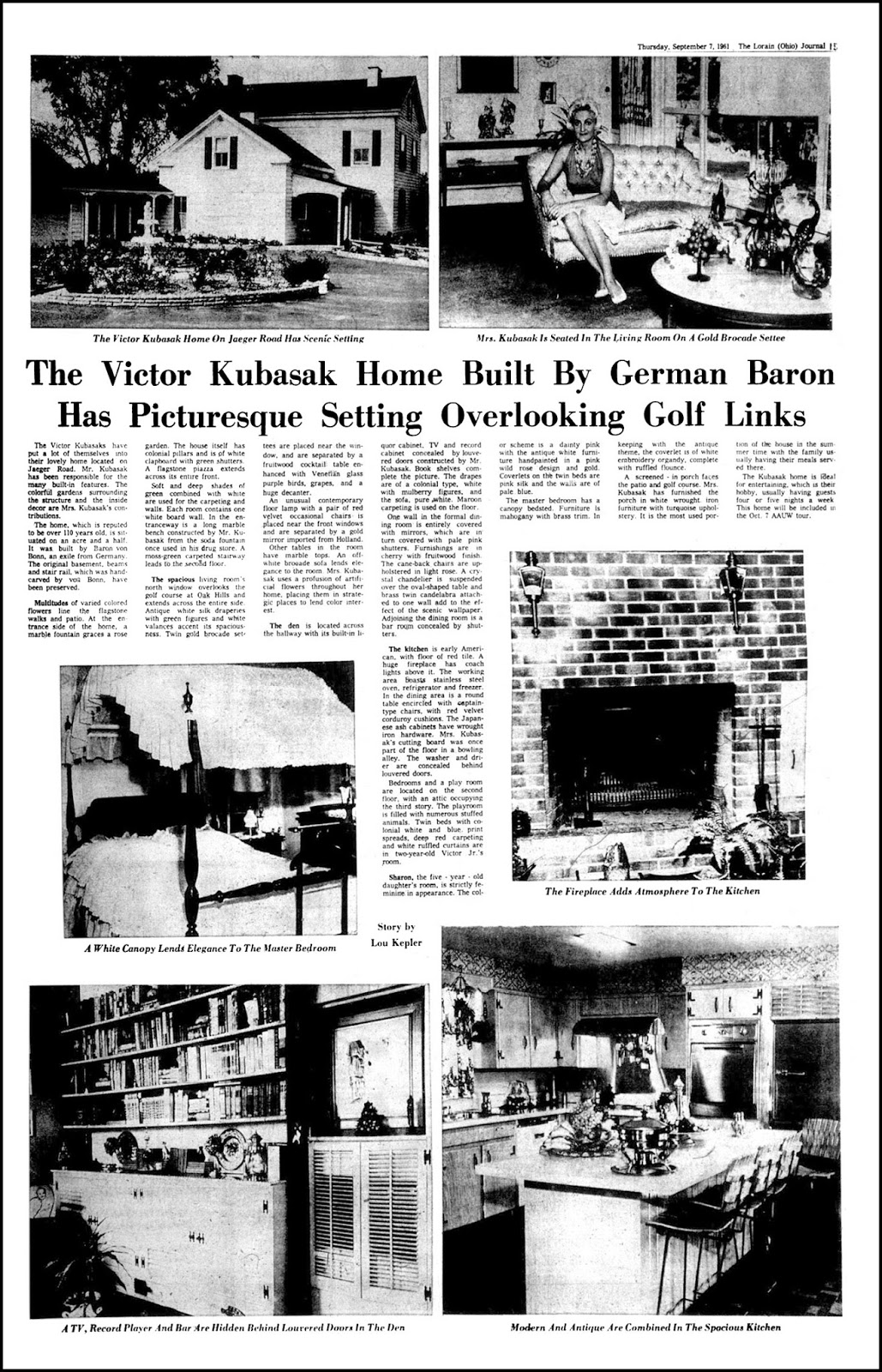 According to the 1961 article, the house was built by Baron von Bonn, an exile from Germany. It supposedly dates back to around 1851.

The article raises a lot of questions, though. If the house really is that old, wouldn't it make much more sense if it was built by the Jaeger family?

At the time that A Standard History of Lorain County (1916) was published, the Jaeger family had already been in Lorain County for more than seventy years, making the family's approximate arrival in the area around 1846. Adam Jaeger is identified as the patriarch of the family. According to the book, he was a German school teacher and "a man of unusual education for his time." The book also notes that "after coming to America he located on a farm in Lorain County in 1843 and lived there until his death, being both prosperous and influential."

I wonder if Adam Jaeger himself was "the German baron" who built the house? I suppose that it's possible that the story of the house's heritage could have been mangled, especially if the Jaegers came from Bonn, Germany.

But this is all speculation on my part. I guess I'll have to do some more research (groan).

I did look in the city directories a bit trying to sort all this out. The bad news is that researching that part of Lorain is almost impossible. Aside from finding it on old maps, there are no listings of the road or its inhabitants until around the 1960s in the city directories, since it was outside of city limits until then.

One interesting aspect of the article is that the house is mentioned as being located on Jaeger Road. For many years, Jaeger ran from Leavitt Road all the way to Oak Point Road.

The Kubasak home wasn't on Jaeger Road for very long, though. By 1963, that portion of Jaeger Road west of Kolbe Road had its name changed to Longbrook Road.
Today, the house looks much the same as it did in the 1961 photo. The beautiful fountain seen in the 1961 photo appears to have been a casualty sometime during the ensuing years.
Here's my photo from over the weekend (below). 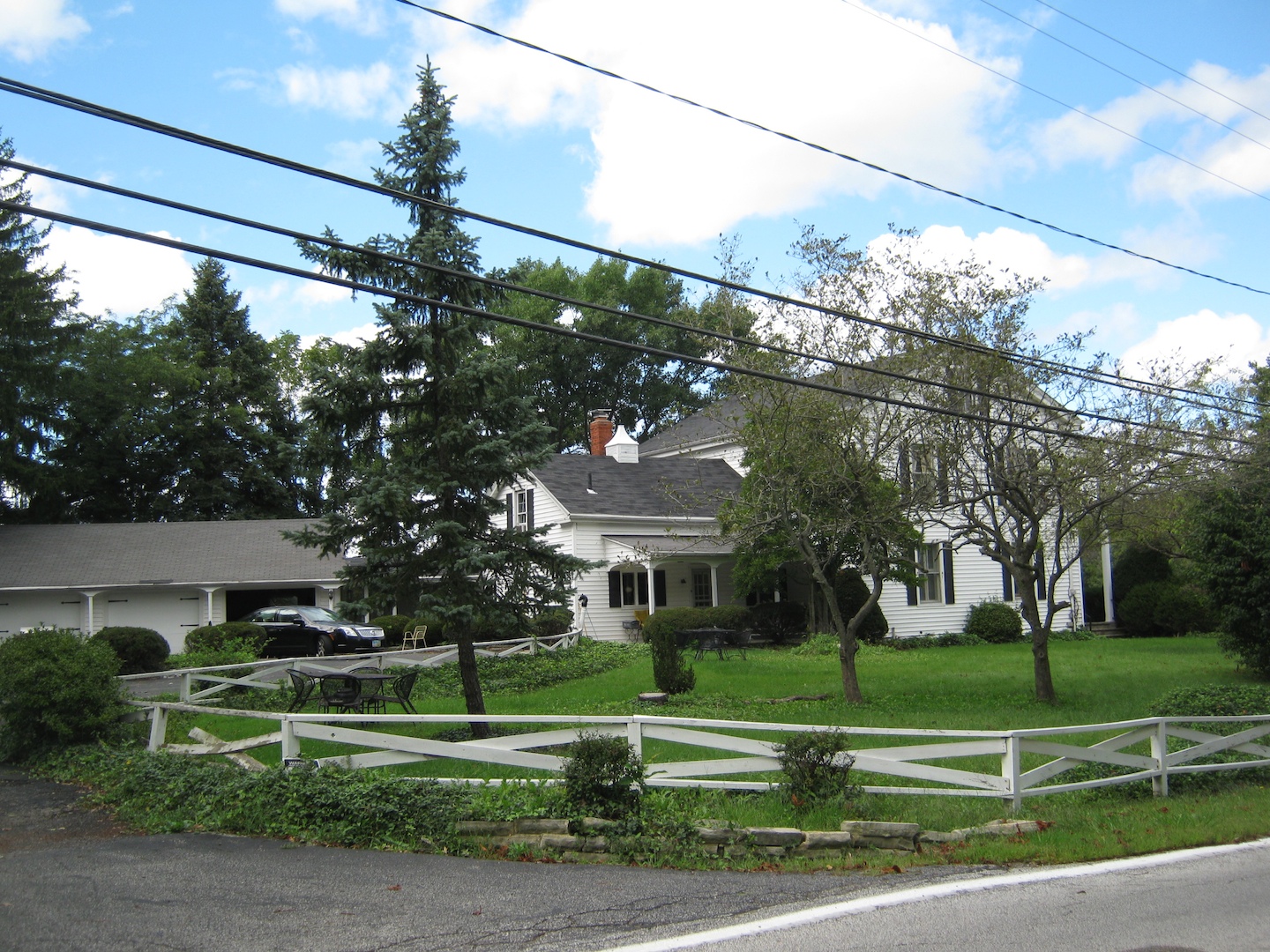 It's a difficult house to get a drive-by photograph of, and I apologize to the current owners if they were wondering why the same car kept going up and down Longbrook past their house.
The house is still owned by the Kubasak family, and I hope they have enjoyed many happy years in their wonderful, historical home – apparently one of the oldest in Lorain.

Perhaps one of the family members can shed some light on this Baron mystery through a posted comment.


****
UPDATE
Here's the link to Part 3 in which a detailed history of the house – with the help of some local historians – is revealed.
Posted by Dan Brady at 6:33 AM

That house was owned by the people that ran the pharmacy on 28th and Elyria Ave.

Right you are – National Pharmacy. I've received at least one email today pointing that out, and I noticed it in a 1961 city directory last night at the library. Thanks for posting that!

Maybe that is the origen of the reference "Pill Hill" I had always understood it was due to all the physicians living in the area. rae