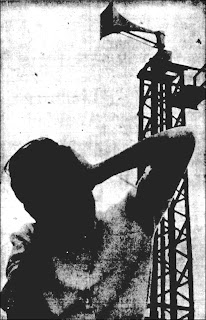 Here's another vestige of Lorain's Civil Defense program of the 1950s: a small newspaper clipping from the May 4, 1954 Lorain Journal about the civil defense siren.

The siren blew but few heard it.

Civil Defense and city officials today awaited reports from emergency police to determine dead spots in the city where the new siren cannot be heard.

Mayor Jaworski said today the siren is "not powerful enough to cover the whole city." The siren was tested at 6 p. m. yesterday.

He said numerous calls came in at police headquarters from people "even close to the siren" who were listening but heard the warning device only "faintly."

The mayor said he will meet with the Civil Defense Administrator Zimmerman and city electrician Gaylord Tucker to decide where to place nine small sirens. The small sirens are expected to take care of the dead areas.


****
You're probably wondering about the photo above. As you can see, it was pretty dark on the library's microfilm and despite my Photoshop work, I couldn't lighten it enough to reveal a face. But the caption for the photo stated, "Connie Smith, 1172 Seventh Street, holds ears while whistle blasts."
Posted by Dan Brady at 6:48 AM