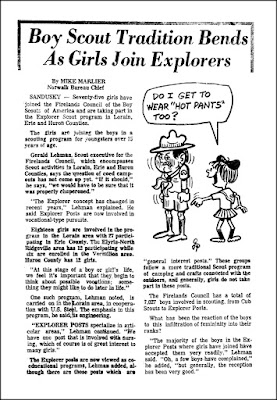 Remember a couple of years ago when the Boy Scouts of America decided to let girls join, in an effort to bolster its sagging membership? It was pretty controversial at the time, although I haven’t read anything recently about how it’s been going.

Anyway, I was fairly surprised to see that fifty years ago, the Firelands Council of the Boy Scouts of America allowed seventy-five girls to join and take part in the Explorer Scout program.

Above is the article from the April 22, 1971 Journal. It’s nice to see that U. S. Steel was involved with the program.

It all seems to make sense, seeing as the Explorer concept was focused on vocational opportunities – and getting young people to think about it at an early age is always a good thing.

Note that the cartoon printed with the story is by our pal Gene Patrick, who seems to have been pretty back at the Journal in those days. Although he was on hiatus from his Passing Scene comic strip, he was providing a lot of great photographs – and the occasional cartoon – to accompany Journal articles. 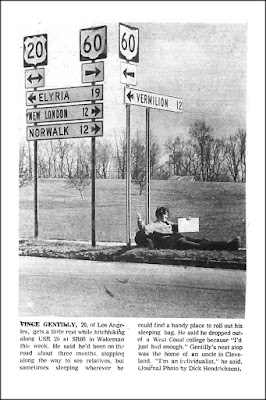 Here’s a great photo that perfectly captures the restless spirit of the youth in this country during the early 1970s.

The Journal photo is by Dick Hendrickson, and it ran in the paper on April 29, 1971. It shows Vince Gentilly of Los Angeles, lazily thumbing a ride along U. S. Federal Route 20 in Wakeman, near the intersection with Ohio State Route 60.

According to the caption, Gentilly had been on the road about three months, visiting relatives and sleeping wherever he could unroll his sleeping bag. He had dropped out of college because he’d “just had enough.”

As you can see by his thumb, he was heading east (to Cleveland, where he had an uncle).

And here’s a Google Maps view of where young Mr. Gentilly was photographed, fifty years ago. 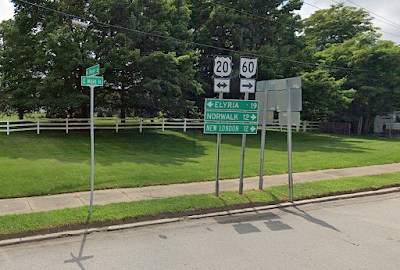 You don’t see too many hitchhikers these days.

Over the years, I've given a ride to a few of them. The few people that I picked up were usually from the area, not the down-on-their-luck transcontinental wanderers. I always made them show me some I.D. and prove that they had no weapon, and I did likewise. They were almost always nice, grateful and interesting.

One gal who really needed a ride was still wearing a Halloween costume, trudging along U. S. 6 in the early hours after having crashed in a strange apartment in Lorain the night before. I helped her get to where she wanted to be.

But it’s been years since I did that sort of thing.

I still see the backpack-wearing, bearded types along Liberty Avenue (U. S. 6) in Vermilion pretty regularly, but no one has stuck a thumb out in a long time. Everyone has cell phones now anyway, and there are just more options available to get somewhere, rather than take a chance with a stranger. 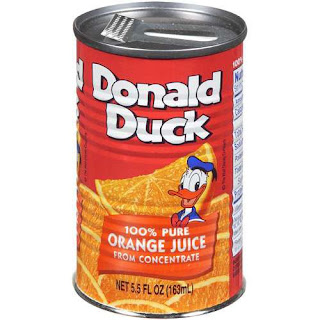 I mentioned how I used to buy it and pack it in my lunch. I thought it was kind of cool that the product – which dated back to the earliest days of character licensing – was still around. But then the label was redesigned, and I grumbled how Disney now felt the need to slap its corporate name on the product. 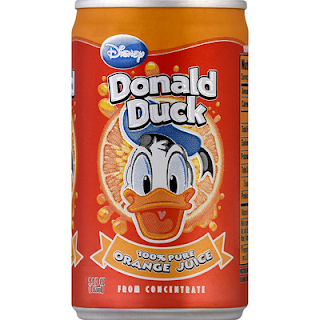 Well, since that post, I’ve noticed even more changes, courtesy of the Disney bean counters and suits.

The canned orange juice product seems to have disappeared; at least I can’t find it at my local grocery. Now it only comes in plastic bottles, which you can buy at Dollar Tree. The Donald Duck product line has also been expanded (although the grapefruit juice has apparently been squeezed out of the lineup).

While in Fligner’s recently, I noticed that Donald Duck Orange Juice now comes in big half-gallon cartons too. 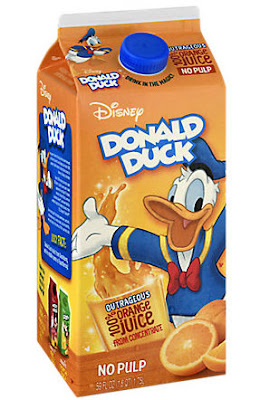 The package is very colorful, with a bio of Donald on the side panel for those kiddies that are too young to have witnessed his animated antics and might be wondering who he is. But note how the orange juice has now been designated “OUTRAGEOUS.”

Hmmm. Google the word ‘outrageous’ and the first definition that pops up is ‘shockingly bad’ – not the best description for something you’re about to drink.

Anyway, despite how I feel about the over-designed packaging, it is very good orange juice.

A cashier at the Dollar Tree in Vermilion put it best: “It’s not too sweet and it’s not too tart. It’s just right.”

Hey, why not watch a really funny Donald Duck cartoon – How to Have An Accident At Work (1959) – while you sip your Donald Duck orange juice?


Do you believe that UFOs are space vehicles from another planet, piloted by creatures that are possibly here to learn more about us?

I think it’s possible. (Nothing would surprise me these days, when you never know if you’re getting the truth about anything from the media.) 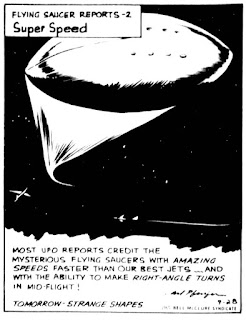 While growing up, I used to think about UFOs a lot. It’s probably because my parents had told me about the War of the Worlds radio broadcast and the chaos that followed.

The Journal also helped fuel my interest (or anxiety, as the case may be) with the small feature about UFOs that ran on the comic page. And we even had a paperback book about the Incident at Exeter around the Brady household.

Today, there are all sorts of forums on the internet for those who believe we are not alone in the universe, to share their thoughts, theories and stories with others who feel the same way.

But that wasn’t the case fifty years ago – which is why I find the story below from the April 3, 1971 Lorain Journal about the U.F.O. Research Bureau of Lorain so interesting.

It took a lot of guts for the two gentleman in the article to share their views about their beliefs about flying saucers so freely (and allow themselves to be photographed by our pal Gene Patrick).

And like I said, I think just about anything is possible today – so perhaps the saucer buffs mentioned in the article were well ahead of their time.

I wrote about a 1964 UFO sighting over Lorain back here. 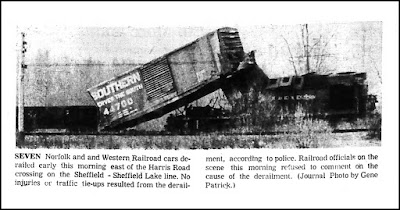 Fifty years ago this month, the small item above appeared in the Lorain Journal on April 1, 1971. The derailment of seven Norfolk and Western railroad cars wasn’t particularly big news (compared to the April 1891 Great Kipton Train Wreck, or the even more tragic 1916 New York Central Railroad Wreck near Amherst) but it was a dramatic scene nevertheless.
The photograph was by none other than our good friend Gene Patrick.
Although the photo caption said that the derailment occurred east of the Harris Road crossing, I still wasn’t quite sure where it happened. So I consulted historian and archivist (and all around good guy) Dennis Lamont. His special area of interest is the Lake Shore Electric Electric, but he knows a lot about just about everything as it pertains to area history.
So where did this derailment occur? Dennis noted, “It is over by what is now the huge Ford yard.
“Before all that happened, there was nothing there except a wye junction leading down to the French Creek Yards.

"That was a normal "way" freight that somehow derailed, and caused the slow speed pileup. Most embarrassing, which is why the railroad didn't want to talk about it!”

During the many years I lived on the east side of Lorain and then Sheffield Lake, I frequently ran into problems trying to get from my house to the I-90 interchange in Avon. It seems that no matter what road I took to get to Colorado Avenue – Root Road, Lake Breeze, Harris Road, Miller Road, etc. – I could count on a stopped train blocking it sooner or later. I almost always was able to trace the stopped train all the way to the Ford yard in Avon Lake. These incidents were frequently written up in the Avon Lake Press.

Thus it was quite the godsend when the massive overpass at Abbe Road was constructed (although I missed how peaceful and ‘countrified’ that area was before it was built).

There’s a classic 1970s Columbo episode in which the good lieutenant is vacationing on a cruise ship with his wife but ends up having to investigate a murder that occurred onboard. During the entire show, Columbo repeatedly mixes up the use of the two words: ‘ship’ and ‘boat’ and is corrected by the ship’s crew, much to his frustration.

For some reason, I think of that episode every time I write about one of the large ore carriers or vessels coming into Lorain’s harbor. I guess I’m trying not to make the same mistake.

And with that introduction, here’s a photo and caption annoucing the arrival of the first ship in the Port of Lorain during the 1971 shipping season. It appeared in the Journal on April 5, 1971. 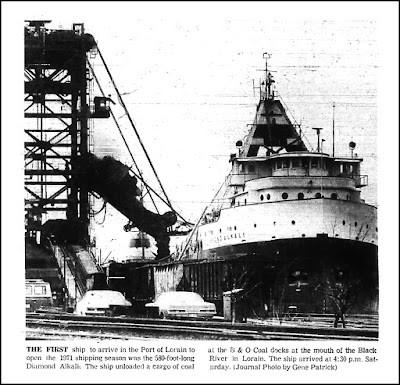 It conjures up a lot of nostalgic feelings of the days when Lorain was an active port and a steel city, with ships coming and going regularly, and forcing us to wait on the opened Bascule Bridge until they were out of the way. It reinforced Lorain’s nautical and industrial heritage and made it an interesting place to live.

Now, when you get trapped on the bridge, it’s often just a little motorboat with an unusually tall mast, putt-putt-putting on its way. It’s just not the same.

Former Westgate Shopping Center Begins Its Ride Off Into the Sunset 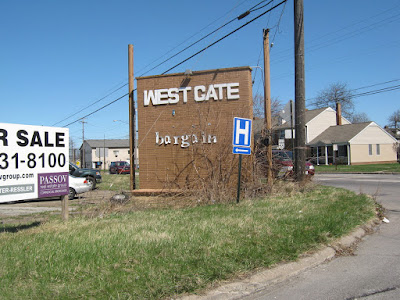 Last week, I noticed some demolition work taking place at the old Westgate Shopping Center at W. 21st Street and Leavitt Road. As it turns out (and according to an article in the Morning Journal), the portion of the shopping plaza that was once home to Stars Disco and Monoplies was being removed due to some damage from a fire.
It’s odd seeing straight through to the railroad tracks and the houses beyond. 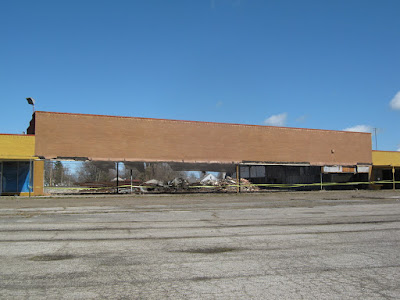 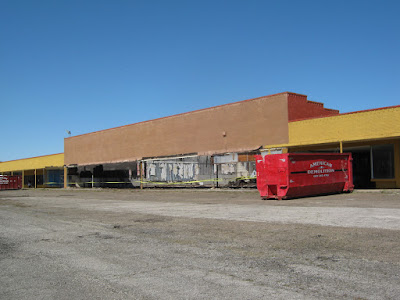 According to the Journal article, it is unclear what the current owners of the property have in mind.
Those of us that grew up on the west side of Lorain remember the shopping center as a vibrant place and a symbol of the growth taking place on that side of town. I wrote about the April 1958 Grand Opening back here. 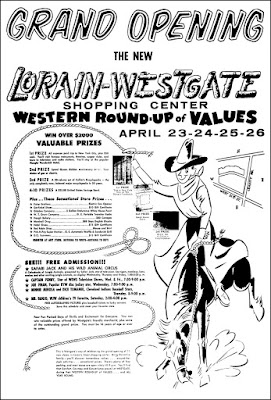 Fisher Foods had already opened its outlet there in February 1958 (which I wrote about here). 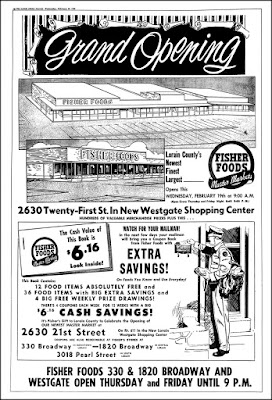 It’s sad of course seeing the building in its decrepit shape. When I stopped to watch some of the demolition, I enjoyed a brief conversation with two of the workers. We were all reminiscing about which stores and businesses were located there.
Here’s hoping that this strategically located gateway property finds some new life and use.
****
UPDATE
Here are a few more shots showing the progress of the demolition. I understand that the damage done to the left portion of the remaining buildings was an unfortunate accident. (By the way, I got my souvenir brick!) 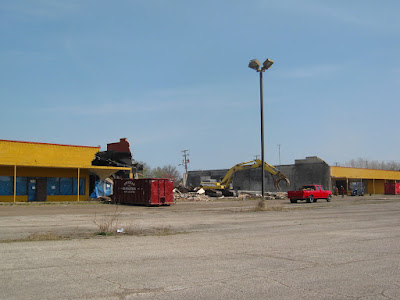 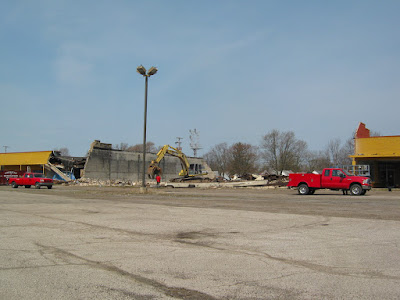 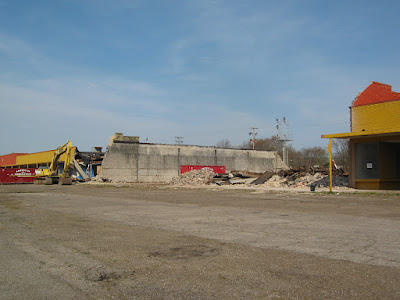 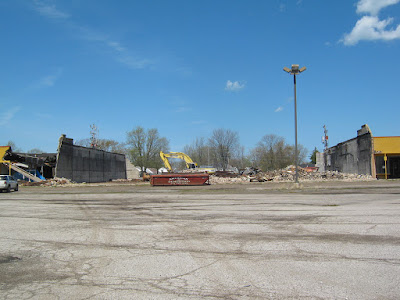