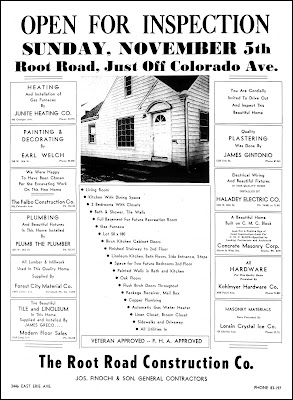 For anyone interested in seeing a nicely preserved row of Lorain houses from the early 1950s, the first block of homes on the west side of Root Road just off of Colorado Avenue would certainly fill the bill.

Collectively, the homes are like illustrations right out of a 1950s Dick and Jane reader. Compared to today’s huge family homes, they might seem a little on the small side. But they're well-maintained, and their lush, decades-old trees give the properties a certain charm.

There may be a limited variety of home styles, but the builder staggered their placement enough so that the undesirable "cookie cutter" effect was avoided.

So who built them? The full-page ad from the November 3, 1960 Lorain Journal has the answer.  The company behind the construction of these homes was the Root Road Construction Company, with Jos. Finochi & Son as General Contractors.

Of course with these types of vintage ads featuring a photo of a new or model home, I like to try and find it so I can photograph it (or pilfer a photo from the Auditor website). I drove over there to take a look this past Sunday.

There were at least three of these style homes in that same block, with only two that could be considered ‘just off’ Colorado Avenue as indicated in the ad. And of the two, only one had the window on the side of the house as shown in the photo, the correct property dimensions and the ‘built in 1950’ designation (on the Auditor website).

I could be mistaken, but I believe the house in the photo is this one (below). Like the other houses on the same block, it has remained true to its original construction, with no outlandish modifications that might otherwise disturb the quaint harmony of the neighborhood. 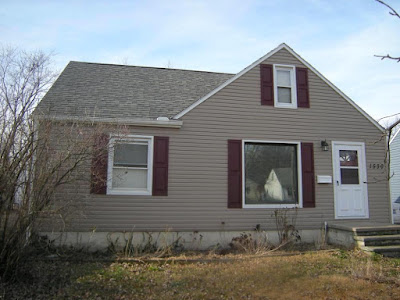 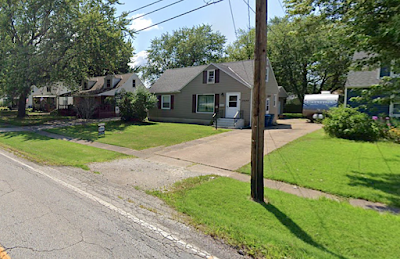 These houses remind me of that old Malvina Reynolds folk song "Little Boxes".It goes a little like this:

Anyway it goes on to say that all the houses and the people are pretty much carbon copies of each other.The only difference being the colors of the houses.
Malvina got the idea for the song when she was traveling south of San Francisco.She drove through a tract housing development where the houses all looked the same.If nobody has ever heard of this song,it can be found on Youtube.

A pretty good percentage of east side homes built in the 40s and 50s seemed to have the same standard 2 bedrooms with oak floors and stair access to the attic for future bedrooms. Must have been the thing to do back then, buy small with room for more bedrooms later. I remember many friends with their bedrooms in those converted attics. Some were really nice with built-in dressers and closets everywhere. I also remember how brutally hot they were in the summertime.

Regarding the advertisement, it is nice to see the contractor used a large amount of local sub-contractors to build the houses. Almost all of them were from right here in Lorain.