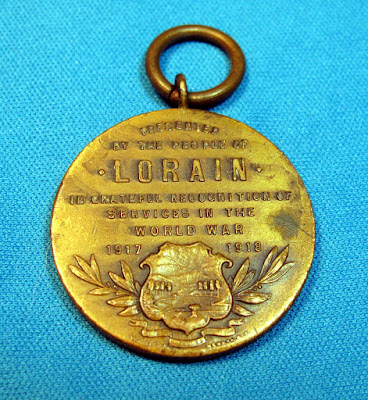 Did you know that the City of Lorain presented Victory medals to its returning veterans after World War I ended?

I didn’t either, until longtime blog contributor Rick Kurish made me aware of it earlier this year after he noticed the above medal advertised on eBay. He noted, "According to the Chronicle-Telegram of June 21, 1919, Lorain was planning a big Fourth of July celebration. Part of the celebration included the presentation of medals of appreciation to the soldiers from the city who served.” 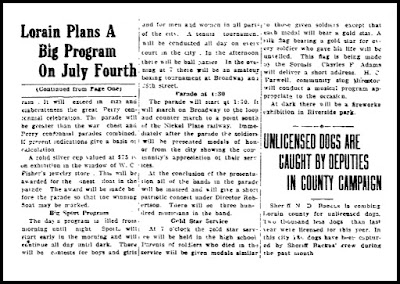 The medal is quite handsome. Its inscription reads, “ PRESENTED BY THE PEOPLE OF LORAIN IN GRATEFUL RECOGNITION OF SERVICES IN THE WORLD WAR 1917-1918.” Under it is a shield that contains a rendering not unlike the Seal of Ohio.

Here’s the other side of the medal. 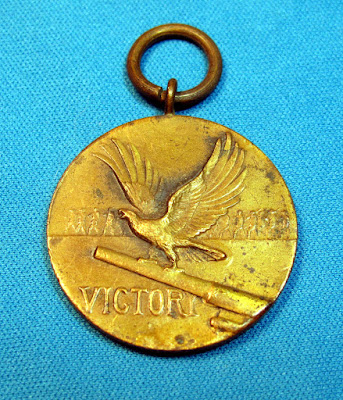 So who made the medals?

The medals were produced by the Whitehead & Hoag Company of Newark, New Jersey. (At the very bottom of the “Lorain” side of the medal are the words, “W & H CO.” and “NEWARK N.J.”)

It’s not surprising that Lorain chose Whitehead & Hoag to produce the medals. At that time, the company was the world leader in manufacturing badges, buttons, banners, gold and enameled emblems and pins, calendars, souvenirs and other advertising novelties.

Since Rick’s discovery of the medal on eBay earlier this year, another one recently turned up there. This one still has its original ribbon intact. 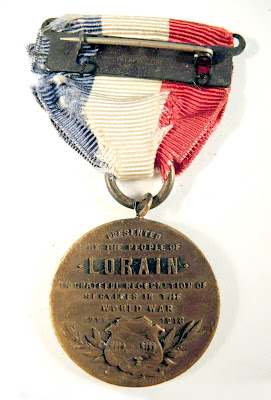 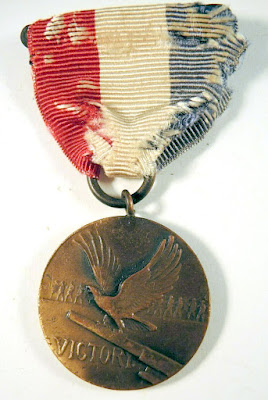 Anyway, the awarding of the medals by the city was a wonderful gesture. With Veterans Day tomorrow, it’s a good time to think about appreciating our veterans.
Posted by Dan Brady at 3:01 AM

The city should start a program like this again.Because without vets and returning active servicemen there wouldn't be any freedom for the people who run the city of Lorain to scam and embezzle the city coffers like they do.That's the least that the elected city officials could do.And they should have to pay for it out of their own pocket too.As we tax payers pay their salary.They work for us.So we already paid for it by paying them their salary....So they should show a little respect.They should all pool their own money a certain amount every week and put into a fund.Then when they had a certain amount of medals made they could give them out on the 4th of July and Veterans day....Just as a thank you to the real working men and women,the veterans.

Not to take away from this gesture, but I suspect that Whitehead & Hoag suggested the medals to local municipalities, then used a templated design for them.

I thought the same thing, Buster, but was unable to find a photo of a similar medal with a different city name inscribed on it. Maybe in time one will show up on eBay, or in a vintage Whitehead & Hoag catalog. It was a mighty nice idea. I wonder how many of these Lorain medals are still around?