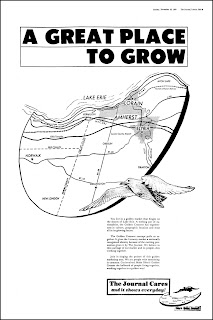 Recently I happened to read a ‘letter to the editor’ in one of the two local newspapers, and noticed the writer’s reference to the days when the area was referred to as the Golden Crescent.

It made me chuckle that someone else remembered it besides me.

Several times on this blog, I’ve featured the little graphic that used to run on the Journal’s editorial page, depicting a seagull soaring over the crescent-shaped map with Lorain marked with a star.

I don’t think it ever really caught on outside of my lakefront home town, because the whole idea was too biased. Other cities included seemed to be an afterthought; I’m sure arch-rival Elyria didn’t buy into the concept.

Anyway, in 1970 the Golden Crescent theme was still in its early years. Thus it was the focus of the handsome full-page ad above, which ran in the Journal on November 22, 1970.

It’s interesting that this version of the map is a little more fair to Lorain’s neighbors. Amherst’s name is typeset in the same size as Lorain. Elyria is a wee bit smaller – but it rates a star.

Meanwhile, Sheffield Lake is ignored, as well as Milan. Maybe they didn’t buy enough Journals there.

And no star for Vermilion, my present home.

Hey Dan - When I used to work at The Journal (old Bdwy location) we jokingly referred to the cafeteria as the "Golden Crescent Room". Todd

Or it could've been because Lorain was THE powerhouse city of the area back then.Lorain had a Ford plant.Lorain had a shipyard.Lorain had Thew Shovel.Lorain had US Steel.The Stove Works.Various machine ships on 28th St and elsewhere throughout the city.Lorain had 2 hospitals...Lorain was a thriving city whose future seemed to stretch forever....Until the bottom fell out...Maybe Sheffield Lakes claim to fame back then was the Shoreway Shopping Center.And a bowling alley too.And now both of them are in pretty much the same shape that Lorain is in.All Milan had was Thomas Edisons birthplace and endless farmland.Milan still has both of those to this day....So out of the 3 Milan stayed the same....The thing to do was to work in Lorain but live in Milan for the peace and quiet.Many people still do.But for a short half century Lorain was on a role.It just didn't work out as planned.

Dan, you mentioned TWO Lorain newspapers; what's the other one?

I consider the Chronicle-Telegram to be a local paper, it routinely sells out at the Lorain and Vermilion newsstands that I visit and has just as much Lorain news as the MJ. The letter with the Golden Crescent reference was probably in the MJ, since I read it more frequently than the C-T.