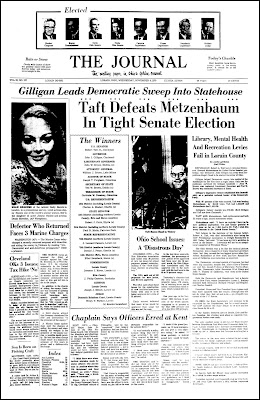 Fifty years ago, the Journal was still an evening newspaper – and thus had time to collect election results and actually print who won.

Above is the front page of the November 4, 1970 edition of the paper. It’s very nicely organized and it’s interesting seeing political names that you don’t run across too often these days. There’s even a strip of photos of some of the winners, which is a nice touch.

Looking over the list of winners, I wonder if that was the beginning of the era in which anyone with the last name of ‘Brown’ was a shoo-in to get elected in Ohio? There’s no less than three of them in top level state government.

And I remember as a kid hearing newly-elected Ohio Governor John Gilligan’s name, and thinking only of the Skipper’s ‘little buddy’ on Gilligan’s Island.