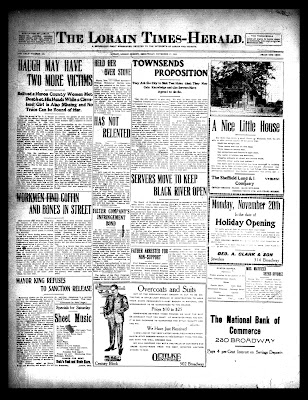 Here’s a story from the November 17, 1905 edition of the Lorain Times-Herald (above) that I probably should have posted closer to Halloween.

What happened is that workers digging up Washington Street in Lorain to lay water mains made a grisly discovery...

Half covered over with rotting wood, the remains of some rude coffin of ancient pattern, part of the skull and a few pieces of the bones of a human being were unearthed at the lower end of Washington Street about 9 o’clock this morning.

While at work, laying water mains across the street about 200 yards from the lake and directly in front of Mayor King’s house workmen discovered the fragments of some sort of a box. Upon closer examination it proved to be the side pieces of a coffin. Under the wood were seven pieces of bone, three of them being parts of the skull. A bone of considerable size, evidently from the lower part of the leg, was among the rest. All the bones are very much decayed and, together with the almost unrecognizable shape and substance of the coffin, form no clue as to the physical character of the long dead inhabitant. The remains were buried in about four feet of earth.

This is the second coffin that has been unearthed at the same point within the last year.

There have been several theories advanced to account for the find. Not in the memory of the oldest settler was there ever a cemetery on that spot. This knowledge led to the belief that the skeleton was that of an Indian. However, it was never the custom of the Indians to inter the fallen members of their tribe in coffins. The skull would indicate that the body was that of a man not fully grown, but the other bones are full size.

There is a theory that this section of the city was at one time, perhaps a century ago, the burying ground of some family or community never known or heard of by the present generation. It is believed that a number of other coffins are buried in the immediate vicinity, and there is talk that search will be made for other coffins. The coffin which was struck last winter contained the bones of an adult. Research into the records of the county will be made to find if a burial ground ever existed near this point.

Perhaps even more disturbing that the above story are the various accounts of mayhem and unsavory happenings found elsewhere on the same front page of the Times-Herald.

Very interesting discovery. I hope you'll have some follow-up information.

One of the things I've discovered from searching old newspapers is that the more things change the more they stay the same. Despite what many people think, or would like to think, the newspapers from 100 years ago were just as full of murder, assault, and divorce as they are today.

You left a real "cliffhanger" Dan. Like Drew, I wonder if there was any followup on the finding of the two bodies. F. Joseph King was mayor in 1905 and lived at 114 Washington Street. Since the bodies were apparently found near his residence, that would place the burials in the oldest part of the city. The land for the first cemetery in Lorain, the Bank Street Cemetery, wasn't purchased until 1828 so it could be surmised that the burials were part of an early family cemetery prior to 1828. It would seem to be possible to find who owned the land where the burials were found in the 1820s. Also, I wonder if the bodies were reinterred in an existing cemetery. An interesting mystery!

By popular demand, I went back to the library to see if there was a follow-up story. I checked the front pages for the next three weeks but unfortunately came up with nothing. I also went back to see if I could find the article about the first coffin, and checked the front pages from October 1904 to May 1905 (the “last winter") and also had no luck. Finally, checking the Lorain Daily News for another version of the second coffin story wasn’t possible, because – as usual – that particular month was not available. I checked the Elyria Reporter and found the story, but it was word-for-word identical to the version I posted from the Lorain Times-Herald. I also checked some spiral binder ’scrapbooks' with 1905 stories printed out---with no success.

Rick: "Bank Street Cemetery" ( a.k.a. Polk St. Cem., etc.) was NOT "purchased in 1828". That was a false historical attribution, mistaking the property-deed that was instead for Amherst's Cleveland St. Cem. -- on Hiram Messenger's land, there in later-named Amherst (formerly also being a portion of the "Black River township" area). That actual 1828 'deed' specifically states that location as being a portion of Hiram Messenger's ''lot', there.
The year 1836 is when Polk St. Cem. was officially established, on land owned by Daniel T. (and Sophia Reid) Baldwin. (Sophia continued owning the adjoining property, after she remarried to Uriah Hawley, when they sold it to Conrad Kranz, in 1856. That 1856 deed specifically mentions this cemetery parcel, and also the un-named "road" which connected the cemetery directly, and apparently solely, to Oberlin Ave.)

...p.s., the word "officially", in regard to the 1836 establishment of Polk St. Cem. ("Baldwin graveyard"), is only loosely applicable. The cemetery was technically established with the 1836 plat for "Charleston village". However, in the actual County's property-deed transfer records, I have never found a LEGAL TRANSFER of the cemetery parcel, transferring it from the ownership of the Baldwin family nor their heirs/assigns. (Conrad Kranz's obituary states that it was Kranz who gave the cemetery to the city; which is even more mysterious, because his 1856 purchase specifically excluded the cemetery parcel from him.)

...also, by the way, coincidentally* the Baldwin family owned that area on the northwest end of Washington Ave., beginning in the 1820s.(Mrs. Sophia Baldwin acquired it from her father, John S. Reid.)
John S. Reid and his wife, are supposed to still be interred in a burialground near City Hall, ( however, these later-discovered burials on the west side of Washington, seem to be outside of, and earlier than, the Reid's burialground).
[*-The other Baldwin land which included the "Baldwin graveyard" on later-named Polk St./Sixth St., was a somewhat later Baldwin purchase.]