35 Lorain Men Gave Their All in World War I

It was originally known as Armistice Day, honoring only World War I veterans. That’s because November 11, 1918 was the day that an armistice was reached and World War I hostilities between Germany and the Allied Powers ceased. (It wasn’t until June 28, 1919, however, that the war officially came to a close with the signing of the Treaty of Versailles.)

Today – with the United States involved in so many other wars since WWI – Veterans Day was expanded to honor American veterans of all wars.

So in honor of the holiday, let’s take a look back at some front pages from the time of the official end of the war and the joyous celebration that followed.

This front page of the Lorain Times-Herald of June 29, 1919 covers the signing of the Treaty earlier that day. It also mentions the upcoming parade and presentation of the medals to the veterans. 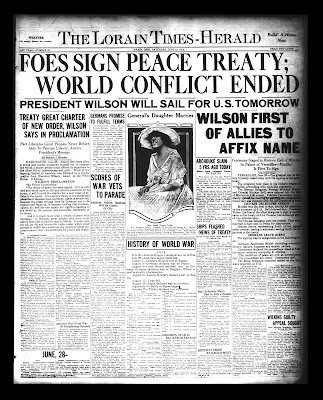 Under the heading, “SCORES OF WAR VETS TO PARADE,” an article notes, “Lorain soldiers, sailors and marines are going to turn out in large numbers for the celebration parade on July 4. This was indicated last night by the enthusiasm shown at the meeting of the Victory association last night. Reports from all sections of the city are to the effect the soldiers will take part in the procession and will be glad to do it. They will be the city’s guests of honor. They will have the place of honor in the parade and besides they will be given a fine home cooked dinner in the Civic Center. The ladies in charge of the feast are preparing to serve 530 men in uniform.
“The military organizations plan a pretty service immediately after the parade. When the procession ends, the soldiers will form in company fronts and will be presented with medals of appreciation from the citizens of Lorain. The presentation will be made by the Mothers of Democracy, all of whom had sons in service. They will be assisted by the Canteen Girls.
“The former will ride in a float just back of the military men and the Canteen Girls will march with the Red Cross division and will then go forward to assist in the medal presentation.
“Immediately after this ceremony the solders will conduct a service of their own. A bugler will play “taps” and the parade will end.”
The front page of the Thursday, July 3, 1919 “Victory Edition” of the Lorain Times-Herald honored the 35 fallen soldiers from Lorain. 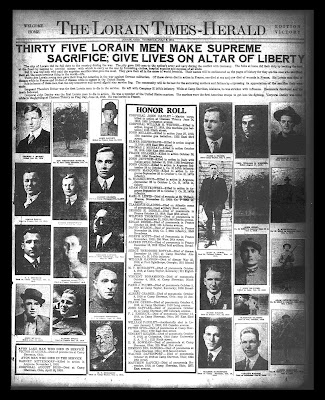 “The city of Lorain did its duty to the country during the war,” the lead article noted. “The city gave 1500 men to the nation’s army and navy during the conflict with Germany. The folks at home did their duty by backing the men at the front by helping to provide money with which to carry on the war by furnishing clothes, hospital supplies and supplies of all kinds.
“But it was the men who paid the supreme sacrifice that gave the most. They gave their all in the cause of world freedom. Their names will be emblazoned on the pages of history for they are the ones who sacrificed their all, the most precious thing in the world – life.
“Thirty-five Lorain young men gave their lives for America in the war against German militarism. Of these eleven died in action in France, one died at sea and one died of wounds in France. Six Lorain men died of disease while in France and 16 died of disease while in camps in the United States.
“It is in honor of these men that the city tomorrow will unveil a gold star service flag. The community will do its best for the sorrowing mothers and fathers by expressing its appreciation of the sacrifice their sons made.”
The July 3rd edition included a variety of ads welcoming the solders home, and thanking them for their service. 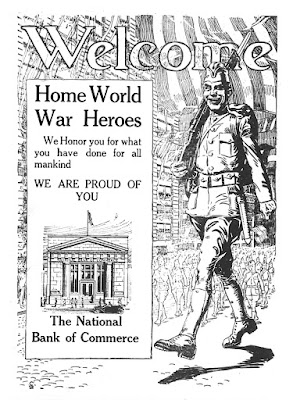 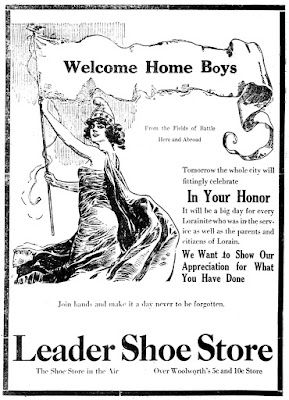 Lastly, the front page of the July 8, 1919 Lorain Times-Herald included a photo of the parade. 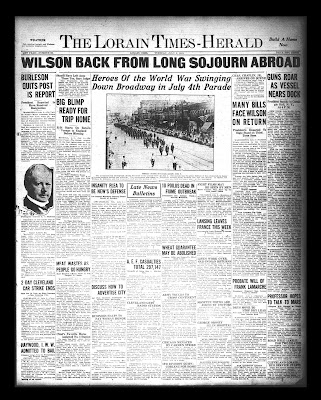 ****
World War I stories seem to find their way to this blog.
Back here, I told you the story of Edward Stebbins, the Lorain man who was awarded the French Cross of War for his valiant service on the battlefield during World War I. And this multi-part blog series (suggested by author and historian Paula Shorf) told the story of the Men of Company H, an infantry unit that was stationed in Lorain before being sent overseas. This post told the story of the homecoming of the Lorain County soldiers of the 329th Infantry. And, of course, Corporal John Danley has been the subject of several posts.
Posted by Dan Brady at 3:10 AM