Fifty years ago on March 15, 1969 the Journal reported the passing of well-known Lorain photographer Rudy Moc that day. The paper enlisted Staff Writer Jack LaVriha to produce an appropriate tribute that also reveals many other aspects of Moc's life.

The talented photographer not only provided countless families with cherished portraits through his studio work, but also documented life in Lorain over the years in photos that today are an invaluable resource to historians. 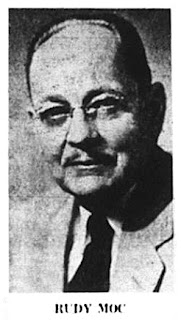 Rudy Moc, 74, a prominent Lorain commercial and portrait photographer for many years until his retirement two years ago, died at 8:20 a.m. today in Elyria Memorial Hospital, Elyria.

Moc, who resided at Snug Harbor Farm on Darrow Road in Vermilion, was ill four weeks.

A prize-winning portrait photographer, he recorded Lorain life and personalities for half a century and was active in yachting and civic affairs for a number of years.

Moc was only 14 when he earned a small box camera which ended his most cherished ambition – that of becoming a great musician.

HE HAD TAKEN thousands of pictures in his long career and operated the Rudy Moc Studio at 1939 Broadway in Central Lorain until his retirement in 1967.

Before that he operated a studio at 2036 Broadway and in Vermilion.

At 7, he started taking violin lessons and was developing a reputation as a musician when he turned to photography.

He put the violin to use, however, playing in the Lorain Society Orchestra which years ago furnished music for many private dances. He was a soloist with the Lorain Concert Orchestra.

He was one of the photographers who "covered" the disastrous Lorain tornado in June 1924. Assisted by a Lorain newspaperman, he published an illustrated booklet containing the story of the tornado in words and pictures.

OVER THE YEARS, he entered portraits in many state and international photography exhibits and won many awards.

He was a past commodore of the Lorain Yacht Club and captured many first place awards with speed boats. He also operated a cruiser for a long time.

In 1963, he went on a 17-day European tour with selected photographers from across the nation to East Berlin and returned with interesting photographs.

In recent years, he made a special hobby of raising flowers and had his own greenhouse.

Funeral arrangements are in charge of the Reichlin - Cooley Funeral Home, Lorain.
Posted by Dan Brady at 5:01 AM

My aunt, Glenna Hopewell, started her career as a professional photographer working for Mr. Moc.

Flintstone House to be torn down.

More than one news site.