If you grew up on the west side of Lorain in the 1960s in the Meister Road/Skyline Drive area, then you might remember hearing the distinctive cry of peacocks in the early morning.

Those sounds would have been coming from the nearby Davidson estate on Meister Road. We only got an occasional glimpse of the beautiful mansion peeking through the trees, so the peacock screams made it even more mysterious.

I’ve mentioned the well-known Davidsons on this blog a couple of times, with this post noting the family’s connection with the Neuman dairy farm, and this one in which we got a rare view of the interior of the Davidson house.

Well, here’s another interesting article from the Journal archives about the Davidsons that ran in the March 23, 1969 edition of the paper. It’s a great interview with Everett Davidson himself written by Staff Writer Bob Cotleur (whose fine, creative writing has been featured on this blog many times).

The amusing and informative interview is kind of long, so I’ll present it in two parts. This portion includes the story of how Davidson became a part-time motorman on the Lake Shore Electric. 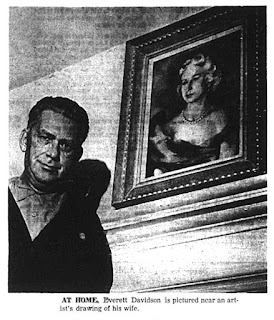 FOR 38 YEARS, Everett Hughes Davidson has been in and out of courtrooms. One more won’t hurt. He takes the stand today, and promises to tell the truth, the whole truth and nothing but.

Q. Your address, date of birth and occupation?

A. I live at 1541 Meister Rd., Lorain, was born quite a few years ago, and my principal occupation is as an attorney with my own law office and as legal counsel for Central Security National Bank.

Q. Have you had other occupations?

A. Oh yes. I’ve peddled papers, cut logs, fixed autos, driven electric streetcars, been a bank teller and janitor’s assistant on the same job, dealt in real estate, in investments, been president of a company making fork-lift trucks, served as an accountant...”

Q. Do you ever appear as anyone other than yourself?

A. “You might say so. Once a year when we pack the dogs, some of the kids, my wife Phyllis and myself into the Cadillac and head for our winter home in Palm Springs, California, I get to feeling like one of the Beverly Hillbillies.”

(During a short recess it was noted Davidson is about six feet tall, sparse, his hair is graying and he is more handsome with his horn-rimmed glasses off. We learned he is today one of Lorain County’s wealthiest citizens, and also learned he began to build his fortune from the ground up.)

Q. Where were you born and what was your early life like?

A. “We lived at 1218 Seventh St., Lorain. I was an only child although I had a sister who died before I was born. Dad suffered a stroke when he was 50 and never worked again. He died at 76 around the time Franklin Roosevelt died. Mother passed on at 84, about 7 or 8 years ago.

“From the time I was in high school, I had to help support the family. At first it was peddling papers and cutting wood, things like that. When I graduated from Lorain High I got a job with the old Peoples Savings Bank on Fourth and Broadway, as a teller and a bit of everything. I knew college was out of the question, financially.

Q. You are an attorney, you’ve stated. What college did you go to?

A. “None. I went to night school in Cleveland for 14 years, graduated after nearly 7 years in 1930 and continued on. Went to Fenn College, American Institute of banking, Cleveland College and Cleveland (Marshall) Law School. During those first seven years I worked at the Peoples Bank, I had three friends guiding me. They were Allen Cuthbert, Howard McMillan and Otto Brown.”

Q. How did you get back and forth from Cleveland to Lorain?

A. “Well, none of us owned autos. We used to take the Clydesdale bus of the Cleveland-Lorain Highway Coach company in to Cleveland for classes, but I’d wait until the midnight freight run of the old Interurban coming back. Knew all the motormen from cashing their checks at the bank. After we’d get out of the station a bit to where it was dark, they’d let me take over and drive. Saved my fare home that way.

Q. When did you start practicing law?

A. “Right as I graduated the depression was on. The Peoples Bank cut my salary $50 a month – I didn’t think much of that – so I quit and rented a room they had upstairs. Municipal Judge W. P. Duffy donated some law things, different attorneys helped out, so I finally opened my office for accounting and law.

“I started by making out tax returns for 50 cents each. During the depression even the established lawyers were having it tough, but after a year or two I got quite busy.

(During another short recess he stressed the added courses he had been taking in accounting, psychology and other subjects. His banking friends and his accounting background were very helpful. He was single and working hard. He was also making investments that would pay handsomely later.)

Next: the Neuman dairy farm connection
Posted by Dan Brady at 4:59 AM