Did you know that for a time, a 25-acre spring-fed lake three miles east of Vermilion on Route 6 was the centerpiece of a recreational area that featured swimming, fishing, boating and water skiing ?

Lake Haven Park was the name of the ambitious lake resort located just west of the Lorain Ford Assembly Plant. It was the unique brainchild of a father - son developer partnership.

As explained in an article in the Sandusky Register of March 5, 1964, "L. D. Lee. Sunnyside Road, well-known local business man, is announcing the formation of a partnership with his son, William E. Lee, Sunnyside Road, for the development of Lake Haven Park, a new recreation area on the east side of the city. Bill is well-known to Vermilion area residents. He was born in Huron, and moved to Vermilion with his family at the age of five, when his father operated the Lee Boat Yards, now Vermilion Power Boats.

"Construction for Lake Haven Park, a 25 acre spring-fed lake, got underway last fall, when over 4,000 trees were cut from the valley. White oak logs were cut and shipped to Spain to be made into barrels, which will be used for whiskey storage in England. The ash, walnut and elm timbers was purchased by a West Salem lumberman.

"After the valley had been cleared of timber, the next step was construction of a dam to hold back the water. A dam, 100 feet at the base, tapering to a 40-foot width at the top, and 450 feet long is being constructed. The dam will have a cement spillway and overflow, and the finished lake will be approximately 28 feet deep at the dam, decreasing to about four feet at the south end.

"Lake Haven Park will feature such recreational activities as boating, fishing, and swimming. Approximately 1,000 feet of sandy beaches will be located in three different spots around the lake. Future plans also call for sailboating, paddle-boating, and play areas for children, to include swings, slides and other play equipment. A special attraction which is being scheduled for the summer, are professional hydroplane races which will be organized by Milford Harrison and his son, Kay, both members of the National Outboard Association and American Powerboat Association. Present plans are to hold this type of race on alternate Sundays."

The article pointed out that Shady Lake Acres on Sunnyside Road was also a Lee development. It was centered on Shady Lake, a six-acre spring-fed lake that was divided from Lake Haven by a dam.

By March 24, 1964, the photo below appeared in the Sandusky Register, followed by the Lorain Journal on March 26th. 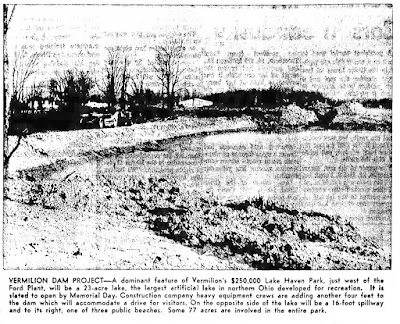 I've never heard of this place; what happened to it?

Hi Alan,
I'm hoping that someone familiar with Lake Haven Park will see this and can shed some light on when and why it closed.

I can't provide any facts to this mystery, but I may have some clues. I recently looked at a home on Lee Ct in the Shady Lake development. The realtors mentioned an old park that still has an access path from Lee Ct. You can see the easement on the auditor website. The auditor website also refers to that area as Lake Haven Park. I didn't personally visit the park, but the realtor had a photo of a park bench and what appears to be a marker of some sort. I've included a link to the house listing which still has the park picture included. Also, I had a friend that used to go fishing in that same area all the time. I can remember him saying that there was some old docks back there.

Dan I posted this blog on 2 different Vermilion Facebook pages, and no one seems to know about "Lake Haven Park",back then and also today,because work has been done on this property in the past 6 months. [There are a lot of rumors going around.] -Bill N -... also.. It was nice to meet you at the grocery store last week.

The building on the south side of the road(a fish cleaning place at one time) was the main building for the beach. They did have hydroplane races atleast one time. The brick building on the north side of the highway(U- Haul rental) was Miss Motors. Bob Miss owned the business which sold American Motors automobiles! They also sold Amphicars and would take customers for a test (drive) in the lake. My parents lived on Lee Ct. in Shady Lake from 1966 until 2008. I was a lifeguard at the park the first year it opened. Peter Young

It's all private property now. There is no public access.

This is from a facebook comment. The Nancy mentioned is L.D.Lee's daughter.....Sandye Fakan said.... "I actually called Nancy this evening to find out some of the details. What she told me was that this was only open for about a year. They had ponies for the kids and a really nice concession stand. The main inspiration was to make it into a campground.

But every time they turned around, the city told them they could not do this part or the other part. They could not turn it into a campground. So after about a year they decided to forget about it. And that is when the houses started going up.

Mr. Lee partnered up with Klingshern (sp) and L&K builders Who started developing the area. The first houses to go up we’re model houses. Parkinson’s, Ruhs, Young’s, Cohen and Fulper’s were the first five. Those that lived in the neighborhood would know who those are. Our house was the very last one because everybody told my dad that it wouldn’t fit.

But anyway the answer is IT LASTED ONE YEAR "

Dan - The link for the house you posted is the house my parents built and I grew up in. The area of Shaky Lake Dr. and Lee Ct. (and the east side of Sunnyside Rd. lumped in) was referred to, back then, as "Shady Lake / Lake Haven Estates." There was a neighborhood association residents joined that kept up the lakes and would from time-to-time rebuild a small beach on Lake Haven. The area was considered to be private for the members of the association. "Grandpa Lee," as all the kids called him, lived on Sunnyside and was the former owner of the park. We played all over the area growing up and watched the neighborhood build-up as the years went on. We just considered the lakes and surrounding wooded areas "ours." - Bob Griffith

Thanks to everyone who left a comment and reminisce here – Anonymous, Bill (nice to finally meet you too last week), Peter, "Lake Haven Landscaper," Sandye, and Bob – and on the Vermilion FB page too. I really appreciate it as it makes the Lake Haven/Shady Lake story much more complete than I could have dug up on my own.

Bob, that's really amazing that the house your parents built and in which you grew up in is the one in that Zillow listing. Thanks for sharing your memories of growing up there, and of L.D. Lee, the man behind the development.