Fifty years ago, Shinrock Elevator, a longtime Amherst landmark was demolished, and the city lost a link to its farming heritage.

Almost symbolically, the elevator was torn down by the technology company whose business success would give Amherst, Ohio global visibility.

A nicely written history that appeared on November 5, 1970 in the Amherst News-Times explained. “One of Amherst’s old landmarks is gone this week as Jerry Eschtruth, wrecking contractor, completes clean-up operations after demolishing the old grain elevator on Maple Avenue,” the article noted.

“Nordson Company has purchased the land, from its parking lot on Jackson street west to and including the old elevator. Also included were the old freight station, the old Mischka coal yard, the storage buildings and the buildings housing the laundromat.

“Present plans are to leave the laundromat and use the freight station and storage buildings for company storage. Because of unsuitability for storage and the danger of fire, the elevator building was torn down.

“The elevator was constructed some time between 1985 and 1900. Although Amherst histories list the start of many old local businesses and industries, including a cheese factory, shear mill, brewery, whiskey distillery, grist and saw mills, gas, water and telephone companies, the U. S. Automatic (predecessor to Nordson Corporation), and many downtown businesses, only slight mention is made of the start of the elevator and no definite date is given.

“For many years the elevator was run as a cooperative as the Farmers Elevator Company. Some six or seven years ago it was purchased and operated by the Shinrock Elevator Company, but then closed down about three years ago.”

Here are a few vintage ads from over the years, from the pages of the Amherst News-Times. As its ads indicate, the company offered a variety of goods, equipment and machinery to local farmers.

As noted in the Amherst News-Time article, the company closed in the 1960s. Here is the article from the January 26, 1967 edition of the paper. 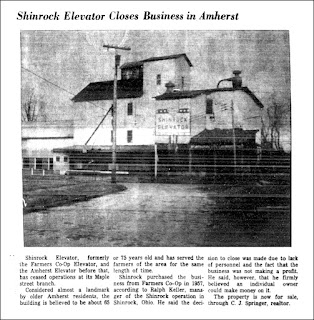 And in the November 5, 1970 edition of the paper, this great series of photos of the demolition was published.

****
By the way, it has been pointed out to me that Nordson has a fine record of historic preservation. Click here to read about the historic Amherst Railroad Depot, which Nordson offers to local nonprofit organizations for business meetings and other uses.
Posted by Dan Brady at 2:18 AM

Too bad about the Shinrock Elevator Co.Another pice of history erased.Seems like that Eschtruth demolition guy has been around forever.I think he owns a bunch of land south of his business on the end of Broadway.Past Rte 254.Something like hundreds of acres of prime undeveloped land.

There was still some foundation of the elevator visible when I moved away from Amherst in the early 2000s. I assume it's still there if you're interested in a "now" photo of the location.

Thanks, Drew. Hey, there was a nice little historical story about your namesake township in the C-T yesterday:

I remember going to the elevator with my dad as a kid in the 1950s. I used to buy ground up corn cobs to use as an absorbent bedding for my pet hamsters there.

I read somewhere that the original Postmaster, Ernie Penfield (short guy with pointed ears) had a way with a fudge sandwich cookie.

Somebody at the Chronicle sure is interested in Penfield Township lately. I get flooded with emails and messages every time! I did know about the post office in the hollow tree. Maybe that explains why I have such a weakness for cookies.