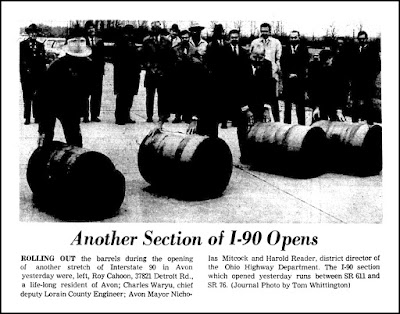 Most of the people who read this blog have probably driven to Cleveland on I-90 many times. But how people remember when I-90 was only finished to State Route 83?

That’s what’s being celebrated in the photo above, which ran in the Journal on November 14, 1970: the completion of the stretch of the highway from State Route 611 to State Route 83 (although back then, today’s Route 83 still had its original 76 designation).

I remember the temporary Route 83 terminus of I-90 well. By 1975 I was driving, and I used to go to Avon Lake once a week (for band practice). The highway conveniently ended where I would have gotten off anyway.

It was the same thing with State Route 2 going west. For many years, it ended at Baumhart Road (which is where I exit it now to go home).

It wasn’t until the late 1970s when I took I-90 all the way to Cleveland for the first time.

I was pretty young at that time, but I remember my mom saying that my brother was one of the first ones to drive on that the day it opened. One of the houses that was moved from old 83(76) to allow the highway to be built was moved and located on my street in Avon Lake.