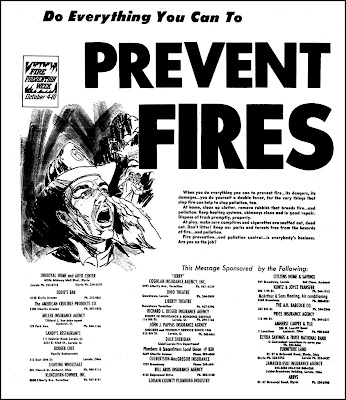 October 4-10, 2020 is Fire Prevention Week™ - so it’s not too late to post this almost full-page Journal ad commemorating the same event 50 years ago. It’s always a good idea to remind everyone to be careful.

There’s not much to say about the 1970 ad. Not even a cameo by Sparky the Fire Dog!

As usual, the fun is checking to see which businesses and organizations are still around, although you can usually count them on one hand. American Crucible is one major business listed that’s long gone.

Fast-food-wise, only Arby’s is still around, since Sandy’s and Burger Chef turned off their burger grills years ago. In 1970, Arby’s had just opened its Griswold Road location (since closed).

There are a lot of insurance companies listed in the ad, but the only one I recognize as still being in business is the one that I use: Janasko. The company was still in the Broadway Building in 1970 and wouldn’t move to their present home at 562 Broadway until 1975.

Other than that, I only see theaters that closed, and banks that changed their name or were taken over by others.

Anyway, in the Sandusky Register yesterday, I noticed that Sparky the Fire Dog had paid a visit to the Erie County Fairgrounds on Tuesday, where local first responders representing Sandusky and Huron, as well as Perkins and Margaretta Townships, filmed some cooking fire prevention videos.