Well, it’s time for another post about one of my favorite topics: Old Dutch Beer, the beer of choice of my parents for many years.

I guess I’m just fascinated with the beer's advertising as it played out in the years when I was a kid. I doubt if there were any Old Dutch Beer TV commercials in the late 60s or early 70s, since it was just a regional brand and wouldn’t justify such an expense. Thus, any brand awareness was largely dependent on the strength of creative print ads.

I already presented a few of the 1960s ad campaigns, which stressed the nostalgia of the brand.

One featured a series of ads with headlines of slightly mangled syntax, with the tagline of “When it comes to good beer making, yesterday we weren’t born.” Another advised prospective Old Dutch Beer drinkers, “What was good beer for your father is good beer for you.”

Well, by 1970 another strategy was being rolled out: more is better, along with the theme of manliness. In this case, the gimmick was that Old Dutch now came in an 8-pack, and the tagline was “When Men Were Men, Beer Was Old Dutch.” That’s the ad above, which ran in the Journal on Sept. 4, 1970.

I’m beginning to wonder which one of these Old Dutch ad campaigns running in the Journal roped in my parents. I doubt that the 8-pack one had too much influence, since my parents hardly ever drank (maybe one beer apiece on Saturday night with our hamburgers).

But I do remember that soggy Old Dutch cardboard outer wrapper. I also recall that my brothers and I each jockeyed to drink the last few drops out of the empty bottles (a big thrill for an eleven- or twelve-year-old).
****
UPDATE (October 12, 2020)
Only a month after the Joumal ad touting the 8-pack, Old Dutch upped the ante again – with a 12 pack called the Old Dutch Brief Case! The odd-looking ad below ran in the paper on October 16, 2020. 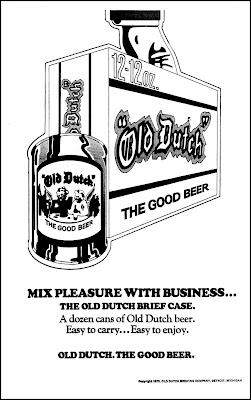 Was the ‘briefcase’ analogy designed to appeal to hard-drinking Madison Avenue admen?
Posted by Dan Brady at 4:02 AM

I always liked the label illustration, with the old couple and a simple meal laid before them.

That's the kind of ad that just wouldn't work today, with the implication that it's manly to overindulge. Six beers isn't enough?