If you're a big fan of White Castle hamburgers and live in Northeast Ohio, then – like me – you're probably unhappy. You see, the makers of the tiny square hamburgers smothered with onions recently abandoned this market area, closing all five of their stores in the Cleveland/Akron area on December 24, 2014. (If you missed it, you can read about it here.) 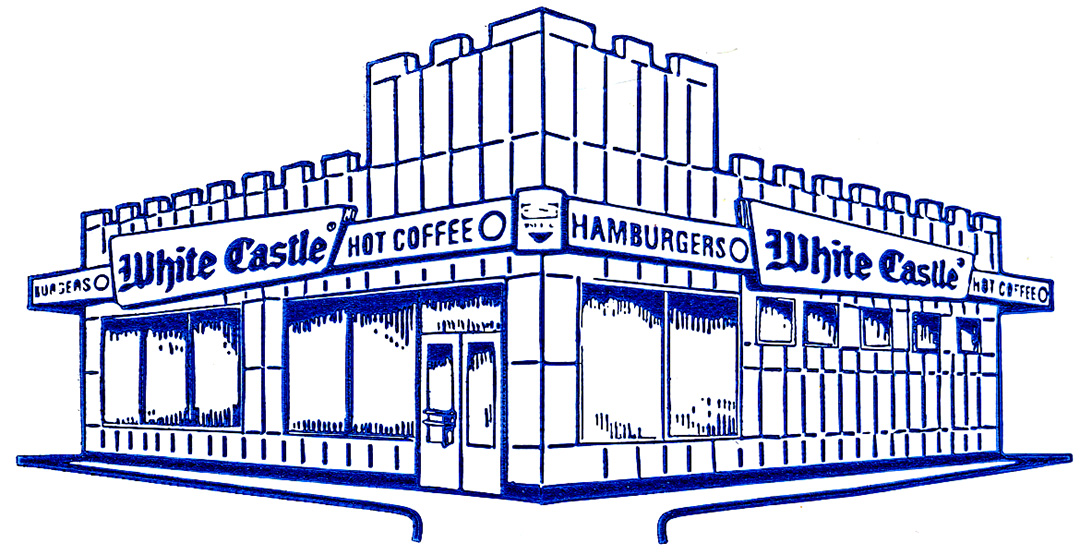 I had never heard of White Castle until I arrived at Ohio State in the fall of 1977 and began exploring Columbus. White Castle was one of those Central Ohio institutions (like Big Bear grocery stores) that was completely foreign to me, but intriguing just the same.

The White Castle closest to campus was the one on N. High Street close to Downtown. It was one of the older model stores (like the illustration at left), and fit in very well with the feeling I had that the whole city of Columbus was stuck in the 1950s.

Surprisingly, I didn't actually try a White Castle hamburger until I was at school for a few years. Someone on our dormitory floor had a bag of them that they couldn't give away.

I was fascinated by the little cardboard carton each hamburger came in. I ended up trying one – and then another.

I was immediately hooked. The White Castle tasted pretty much like meatloaf to me – and I love meatloaf. So it was the beginning of a beautiful, oniony relationship.

My dorm-mates and I never called them sliders, though. That was something that seemed to come later as a marketing gimmick. They were just White Castles to me. (I guess that's like calling a McDonalds hamburger a "McDonalds.")

After I graduated from Ohio State, I made frequent visits to Columbus to visit my old roommates and pals who had stayed in town. So, on each visit, I would stop at one of the White Castles on the outskirts of town (such as the one on High Street in Clintonville) and bring a large bag of frozen hamburgers back to Lorain.

When I couldn't make it to Columbus, I had to make do with White Castle replacements – such as a hamburger from Akron-based Hamburger Station.

Anyway, you can imagine how happy I was when White Castle entered the Northern Ohio market in the mid-1980s. One opened on W. 117th Street, and in Lorain County there was even one out by Midway Mall. Now I could buy them fresh to bring home for dinner anytime I wanted.

All this consumption of White Castles, however, had a detrimental on whatever car I was driving back then. I soon learned that it was not a good idea to leave a bag with empty White Castle hamburger cartons in your car under your seat for weeks. The forgotten bag acted like a reverse air-freshener, prompting many a "What is that nasty smell?" comment.
Posted by Dan Brady at 6:14 AM

Hi Dan, I don't remember the Midway Mall White Castle location. Where exactly was it?

PS. Thanks for writing this blog on my home town. I always look forward to the memories you bring!

I never had White Castle (which from what people say always seemed to be a love em or hate em thing) but I'm struck by how similar your story is to my discovery of Chipotle burritos. Around 2000-2001 I made regular trips to visit friends in Columbus where I was introduced to Chiptole on High Street. I was immediately hooked, and getting a burrito was then an anticipated part of every visit to Columbus, as there were no Chipotle's in northern Ohio. I remember how excited I was to find one in Cleveland Heights while staying with another friend. Now they're everywhere, of course.

It is now the location of the Hertz car rental building.

Location for Hertz is at Rt.57 & Griswald

Do you know if I can buy just the boxes. I am have a n event at my resort and we wanted to use them in our display

I’ll bet if you made a purchase at a White Castle restaurant, then they would probably give you some fresh, unused cartons. (I’ve gotten clean cups that way at another fast food place.)

There aren’t any White Castles up here in Northeastern Ohio any more or I would stop in and try to get some for you. Or were you looking for vintage cartons?